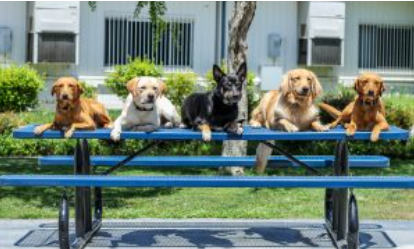 These are the canines that will be attending the campus of Yorba Linda High School sporadically.

Nowadays, the world is becoming an increasingly dangerous and alarming place. With humans all over the globe using weapons, alcohol, drugs, and other illegal substances, many wonder how humans can make the world a safer place. In the USA alone,  students suffer from the attacks of school shooters, drugs, and all-around bullies. At school, there is Red Ribbon Week, assemblies, and awareness groups trying to stand to make a difference. Truthfully, their involvement does little change and doesn’t reach the core of students’ well-being. It has to start will change within the campus and be intertwined with every student making them comprehend and deliver change to themselves.

At Yorba Linda High School, a controversial change is occurring on campus. Drugs are widely used around the campus, with students carrying them at school. These drugs can include anything from Novos to wax pens to Juuls and more. There also may be weapons of some sort or medication not authorized by the nurse’s office. This may lead to significant problems at school.

Interquest Detection Canines is a company that has dogs to search for alcohol, weapons, medications, and drugs. Hired by the school district, the dogs and  workers’ top priority is to make Yorba Linda High School a safer place. A typical day when these dogs and their caretakers are to check in with the office at any given time and day. The areas the dogs will search all around the campus, such as classrooms, parking lots, and student backpacks.

If the dogs find anything they detect, they patiently sit down waiting for their treat of exposing the illegal drugs, alcohol, gunpowder based items, and weapons and  medication. After this, the student found with the substance will be called up, if it was in their vehicle, or taken to the administrative office for further investigation. From here, the punishment will be instructed by the administrative staff involved.

There are many mixed opinions about the dogs and how students will be the affected ones in this situation. Jersey Dela Cruz (11) stresses the fact “even if the drug dogs come on to campus to search and find the stuff students carry throughout the campus, many students will find ways around it.” Although Jersey makes an admirable statement, the dogs’ noses might be smarter than students think, and they’ll build a safer campus.

On the other hand, do these dogs invade students’ privacy? Well, Danny Walters (11) feels “the dogs are a violation of my privacy and a distraction to my education here on campus.” Even though Danny may feel a violation of his privacy, the point is for the campus to be safer. But many students want to pat and interact with the dogs, which may cause a distraction for students on campus.

Administrators and parents find that the dogs will balance and protect their students from danger. Mr. Okamoto (Staff), Assistant Principal of Student Services, is head of the program being administered to come onto the campus. It takes a great deal in making the school a safer place. Although it may make students uncomfortable at times, he realizes that it is necessary for a happier campus.

Overall, the purpose of the dogs sporadically coming to the campus will establish a safer campus. It puts a little division between students and staff but shortly could lead to a better understanding and reasoning of not bringing illegal and inappropriate substances to school.