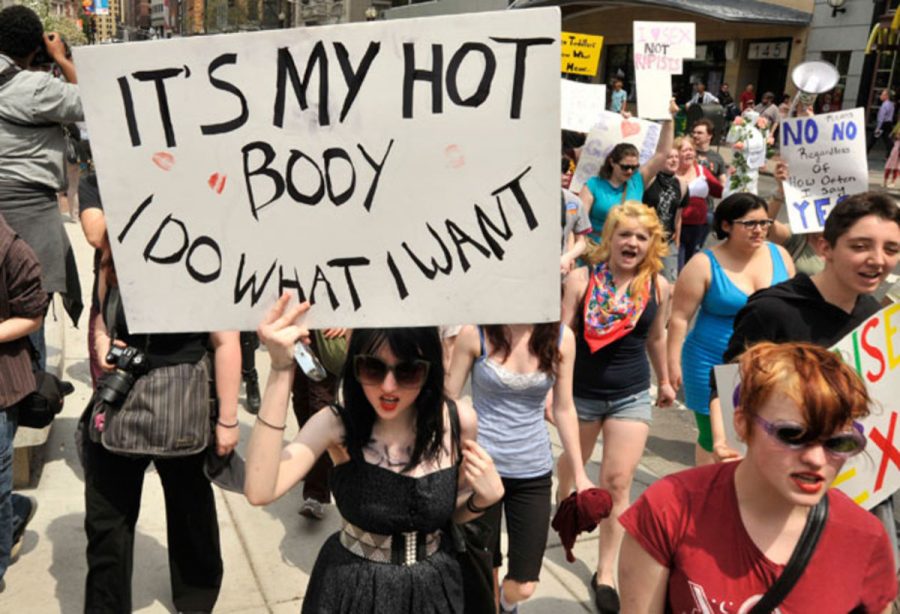 An image taken from a protest in which a woman writes, "It's my hot body, I do what I want."

Sexuality in its entirety is a topic often viewed as taboo and off-limits. It is meant to be kept private and not be seen, discussed, nor read about. Yet in an increasingly forward thinking world, views on sex have slowly evolved, with more people being open-minded about differences in values and lifestyles. While incredible progress regarding the topic has occurred, female sexuality continues to be stigmatized and disparaged. With these common perceptions continuing to persist, “slut”-shaming has emerged as an incredibly painful yet overlooked issue.

“Slut”-shaming is described by the Huffington Post as “the experience of being labeled a sexually out-of-control girl or woman (a “slut” or “ho”) and then being punished socially for possessing this identity.” Fear of “slut”-shaming has created a no win situation for most women. Acting “promiscuous” will bring about judgements yet acting “prudish” will bring about criticism.

Especially with the emergence of social media and the way in which its presence dominates current culture, a woman’s persona must be approached with even more caution. A photo deemed overly sexual could remain with a woman forever, whether it is a photo posted by the individual herself or shared without her consent. Regardless of the circumstances, a licentious photo could possibly interfere with future relationships and professional opportunities.

The unreasonable standards and rules regarding female sexuality are made worse with the misconceptions attached. For many, they view sex as purely a tool for women, an act done entirely for one’s male counterpart. It is a woman’s source of power and her way of contributing to society. Women are mere concubines, individuals serving men without their own personal desire.

Yet these ideas are extraordinarily skewed. Female hedonism is something that has always persisted yet has been always matched with shame and damnation. While men are not only accepted but expected to pursue or act on their sexual whims, a woman is supposed to suppress her feelings and focus on cultivating an image that will be desirable to a man. If she were to defy this expectation, she would be defamed and rejected.

The polarizing reactions to sexuality regarding men and women only reasserts the prevalence of a gender double standard. Men are celebrated for their behavior, awarded for the notches on their belt and the degrading stories they can tell of the girls they have been with. Women, on the other hand, are left with enormous amounts of guilt and tarnished reputations for acting in a way that is deemed “promiscuous.” As the Huffington Post put it, “boys will be boys, and girls will be sluts.”

The media and culture has normalized “slut”-shaming, with most women over the age of 25 having been labeled at some point in their life, a “slut” or a “ho.” The experience of being berated for her sexual behavior and expression has become a common aspect of a woman’s life. With an incredibly flawed notion engrained so deeply into society, an environment that is inherently laced with gender inequality has developed.

Because the negative effect of “slut”-shaming has been often invalidated and disregarded, experiencing it is a common condition of female life. On top of the emotional turmoil this type of abuse has on a woman, it also subjects her to sexual harassment and even assault.

The prominence of “slut”-shaming has nurtured a situation for men to deflect responsibility and women to always be the ones punished. What worsens the fact is the prevalence of women being the perpetrators of this appalling behavior.

Of course there are those who will pass judgements and conform to society’s small-minded ideals regarding female sexuality, but there will also always be those who are conscientious of how erroneous gender norms can be. It is refreshing when men are supportive of female sexual liberation and it is comforting when many women, such as Jayden Hawley (12), support the idea, “that women should never tear other women down. Just because an individual has different values and lifestyles, doesn’t give us permission to judge and condemn them.”