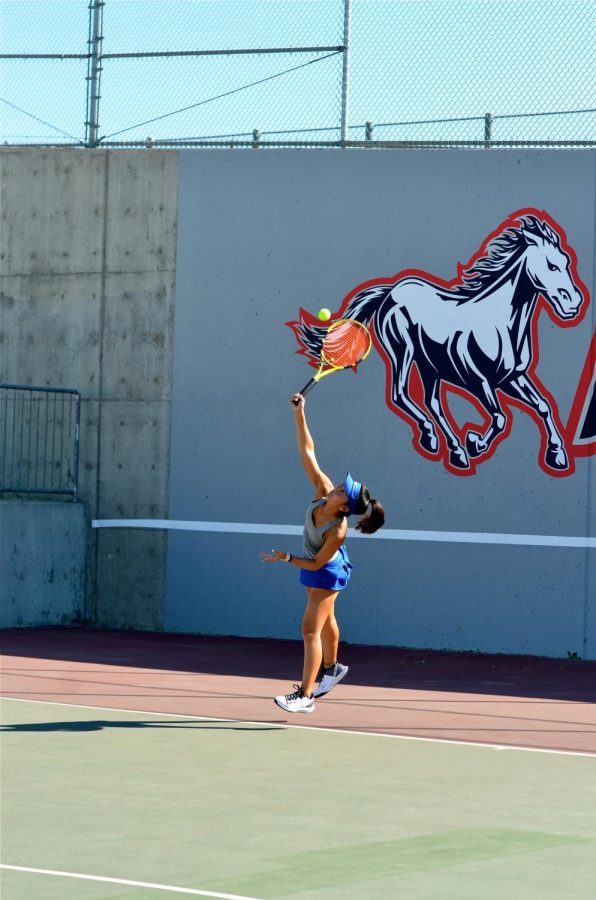 With confidence and pride, Brionna Nguyen (10) proves to have an exemplary approach as she serves to her opponent.

Tennis is a sport that only a few individuals seem to have mastered. With its need for intense dedication and perfected skills, most people overlook the sport when determining which hobby to devote their time to. Here at Yorba Linda High School, women’s varsity tennis is one of the highest-performing teams on campus. Combined with their admirable bond and undeniable expertise, these ladies have proved to be some of the most disciplined athletes the tennis program has seen. From the countless hours these girls have devoted to their improvement, to the helpful instruction from Coach Lejano (Staff), the women’s varsity tennis team has truly become one of YLHS’s many accomplishments.

With fifteen years of experience under his belt, Coach Lejano ensured nothing but success for the ladies of varsity tennis this 2019 school year. Each day during sixth period, the team met on the court to prove their expertise and continue to perfect their skill sets. Evidently, the countless hours of work put into their performance paid off, as these ladies only faced few losses and have even advanced to compete in CIF. Their efforts towards a successful season began over the summer when camp took place. Hot summer days filled with matches and practices may have been difficult for these girls, but it all seemed to prove itself useful during the league matches.

Not only has this season been about becoming better tennis players, but it has also been about forming a family. Considering the hours this team spends with each other, it was only a matter of time before their team created its own little community. Each and every teammate has formed a bond with each other, and it is clear in their performances on the court. The chemistry these ladies have sparked is seen in every serve and stroke. As these girls graduate and move on from tennis at YLHS, they will not just remember their immense successes on the court, but they will also leave with life-long friends by their side.

While the 2019 women’s varsity tennis season comes to an end, we mustangs wish these ladies the best of luck as they take on some of the best teams at CIF. Knowing they have prepared all year to compete with such strong competitors, Megan Cuan (11) stated that she feels, “confident and prepared” to give it all she has. With such amazing talents by her side, Megan explained that she is, “so proud of [her] teammates and can not wait to take the court.” Students at YLHS are so excited to witness the success of their peers and they continue to wish the tennis ladies the best of luck as they are put to the test at CIF.