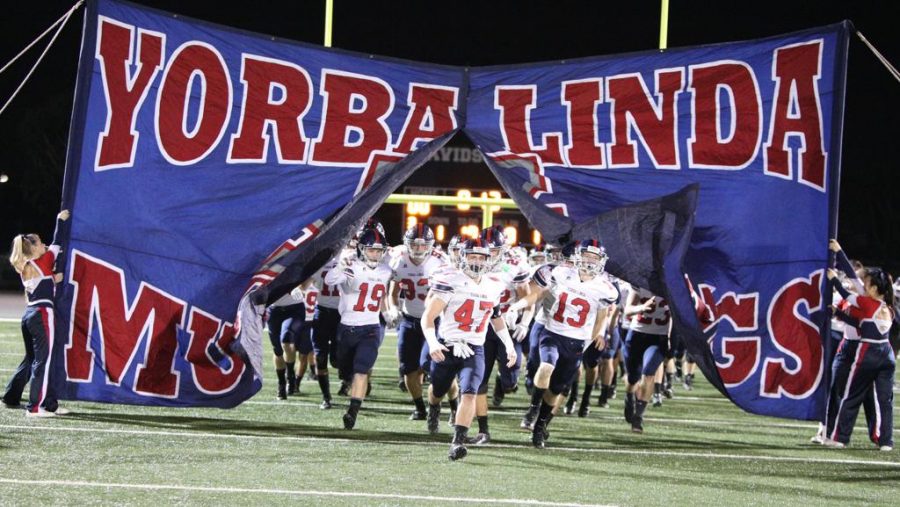 The YLHS Varsity Football team runs onto the field before a game.

The YLHS Varsity football team had yet another magnificent season this past fall. The Mustangs finished off the season with a record of 9-1 (including a 3-0 league record) after defeating Canyon High School last week by a score of 51-29, their best regular season record since 2013. The teams performance was good enough to earn them their first ever Crestview League championship.

Overall, the Mustangs dominated their opponents throughout the entirety of the regular season. They ended the season with six straight wins, five of the six games by a winning margin of 20 points or more. It was a great momentum builder for the team, as they fought through a patch of tough games during the month of September. That month included a close 28-23 double overtime win at home against Orange High School, and their only loss of the season at Foothill High School by a final of 14-7. Perhaps the biggest win of the Mustangs season was against Villa Park High School, as the Varsity team defeated the Spartans for the first time. Tyler Kent (12) said about the win, “It meant a lot to us to finally beat Villa Park. It was a game we had been looking forward to all year since they’ve always had our number.” Kent also said that the Mustangs determined defense was a huge contributor in the win. “Without our defense performing like they did, we might not have won the game.”

After the squad defeated Citrus Hill High School last week in their first CIF playoff game by a final of 28-0, the Mustangs will play their second round CIF playoff game at Shapell Stadium this Friday, November 15th. St. Paul High School will be the team’s foe. With so much talent and experience on the roster, a terrific coach in Jeff Bailey, and the support of you, the Varsity team hopes to win another CIF Division Championship in the coming weeks. Make sure to come out and support the Mustangs to victory this Friday!