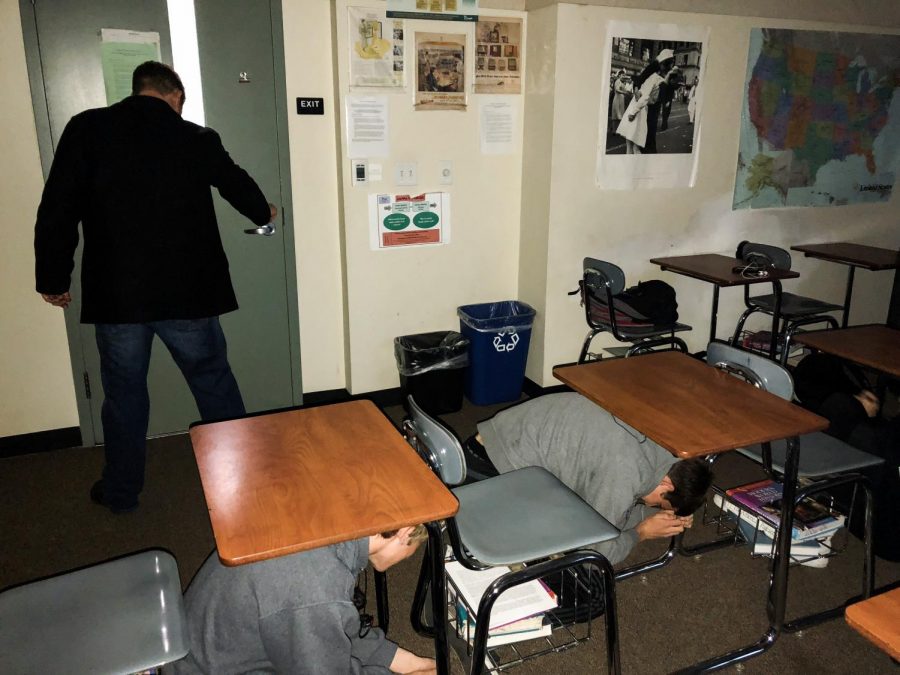 Students at Coronado High School hide beneath their desks during a school lockdown drill.

I sat silently in the darkness, my second period class laughing and talking as we awaited instructions. Bags were already packed, our second period teacher having informed us that a lockdown drill was to occur at the conclusion of class. Protocol had been ingrained into our minds from the annual drills we’ve practiced each year. Lock the doors. Turn off the lights. Hide. I knew exactly what to do, but I couldn’t help thinking about what I would do if an incident such as this actually occurred.

Every drill I have practiced over my time in school has given me a clear understanding of what to do in case of emergency while in class, but what happens during passing period? Or break? Or lunch?

On February 14, 2018, a gunman opened fire at a high school in Parkland, Florida. This event shook the nation, bringing awareness to the enormous issue that has dominated modern culture. In the past 18 years, more people have died in mass shootings than in the entire 20th century (Springer).

As a high school student, the Parkland shooting was one of the most terrifying and impactful events to have occurred during my lifetime. School is the place where my peers and I expand our knowledge and pursue our education. It’s the place where we spend time with friends and play our sports.

I understand that I was born into a society in which the fear of mass shootings is unavoidable. Yet the educational institutes that my fellow students and I attend have an obligation to prepare us in the face of tragedy.

Of course, schools take the precautions of practicing a lockdown drill each year, but quite frankly, it’s not enough. During the drill in October, our school practiced a lockdown in tandem with an earthquake drill. With the growing prevalence of school shootings, squashing a lockdown and natural disaster drill into a single practice is not only ineffective, but disrespectful. It feels that we do this to save class time and avoid disruption, but potential of a mass shooting is not an issue to take lightly. It’s not an issue to overlook. It is a prominent problem that has resulted in devastation across the nation and has corrupted America’s youth. It is a problem that deserves its own time and emphasis.

I can’t criticize the lockdown protocol we run through, as I think that these drills have prepared us for how to act in the case of a school shooter while we’re in class. But the issue that worries me is that we are utterly unprepared for an assailant to enter the campus while we stand with our friends, eating lunch and making jokes.

I feel lost as I walk through the quad during passing period. I wonder if the sound of a gunshot was to explode nearby, what should I do. I can only imagine the riot of crying teenagers as they struggle to find an escape. There’s no way of knowing where the shot came from. There’s no way of anticipating whether there’s more than one gunman. How does one decide whether to run for the hills or seek shelter in a classroom?

I think about freshmen hiding beneath the table, or seniors stampeding over one another to reach their cars. Then I think about the students, frozen in time, unable to move in the face of such a petrifying threat. This fear and lack of assurance is a concern that many individuals share. Even a senior, such as Jacob Viveros (12), who’s run through his fair share of emergency drills, “has no idea how [he] should react” and “is afraid for the safety of clueless students running amuck.”

My confusion is absolutely terrifying. With a problem so severe, how could I feel so unprepared? As students, we need help and guidance for what to do in an attack so horrifying. We need drills that mimic genuine emergency and instruction on what to do if we aren’t in the familiarity of our classrooms. Our education system needs to do more to help protect us from one of the scariest issues of the 21st century. I can’t say that saving time is more important than saving lives.