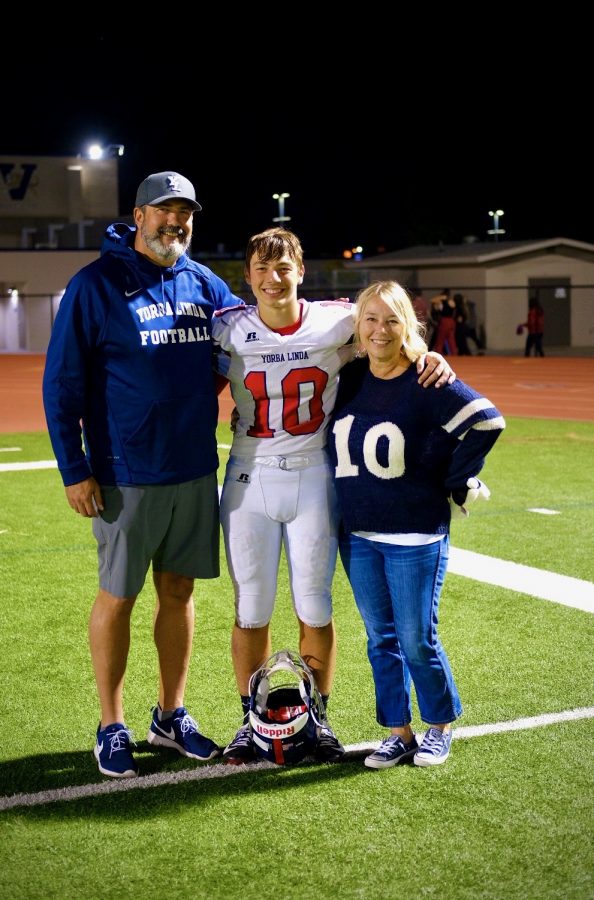 Rhys Weingarten (12) after a football game with his parents

Rhys Weingarten (12) is currently a senior at Yorba Linda High School who goes the extra mile outside and inside of school. He is an amazing example of what it means to be a student athlete here at YLHS, as he has been a part of our school’s highly acclaimed football team since freshman year and has been on varsity since sophomore year. In addition, he has been and is currently enrolled in various honors and AP classes making him a hardworking, determined, and friendly student to his peers and teachers.

Being a part of YLHS’ Varsity Football Team is a huge responsibility, as it requires him to spend four to five hours each day, during the school week, dedicated to practice. As corner back, Rhys is expected to be agile and quick in his movements while playing defense and covering the wide receivers from catching the ball, by tackling them. Rhys is also expected to always play his best at all times while on the field and be a supportive member for his teammates. Ever since the fourth grade, Rhys has expressed his love for football by playing on the field. His early passion for the sport has truly helped him develop his skill and expertise, as exhibited on our field.

This year, Rhys is enrolled in classes such as AP Government/Economics, AP Calculus AB, and AP Literature. Of course, balancing football and these demanding classes can be difficult, but somehow Rhys seems to make it work. He says that he has “learned to balance [his] time efficiently” by doing things ahead of time and scheduling out his week. Also, he states that “listening to loud rap music” helps him because it “keeps [him] from falling asleep.”

To add even more to his credited list, Rhys has been a board member of Yorba Linda High School’s National Honors Society for two years in a row now. Being a part of NHS is another huge responsibility that Rhys holds, as he overlooks the students’ service hours and events held by the organization. Furthermore, Rhys is a part of the Senior Homecoming Court this year. He describes being on the homecoming court as “ cool because in the future [he] gets to look back at it.”

On his free time, to distress from football and school, Rhys loves to spend time with his friends and family and coach flag football. He comments that “coaching flag football has helped me understand kids and football better. I had to balance being friends with them and being an authoritative figure to them, which is hard to do. The football aspect was difficult, even though I have been playing for eight years, teaching is different than being taught. Having to make the plays that younger kids can run is challenging but rewarding when they figure it out and do it right.”

Ultimately, Rhys’ excellence in his academics and athletics, makes him stand out among other students. As he approaches college application season, he is thinking of applying to schools such as UCLA, USC, UC Berkeley, UCSB, Washington, Oregon, and Rice University.