The Marvelous Wonderettes: Worth Your Pennies 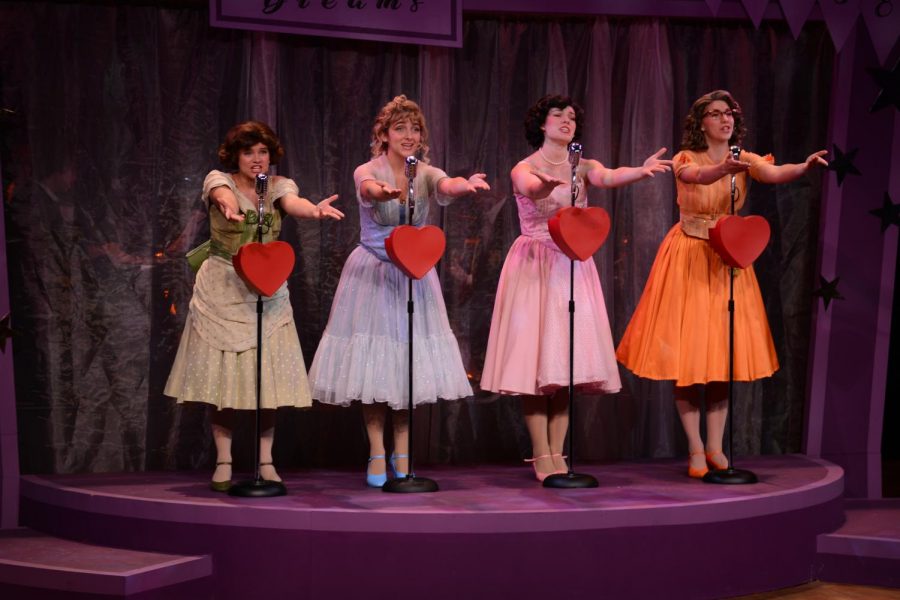 The Wonderful Wonderettes sing to their fellow classmates.

Each and every year, the theater department at YLHS tries to top their musical performances from previous years. With such talented students attending this award-winning school, it is almost impossible to put on a better show than the year before. This past weekend, four of our most spectacular performers here at YLHS left the audience wishing they could go back to their high school days and experience it all over again. The Marvelous Wonderettes, performed by Julia Massey (12) as Suzy, Maddy Young (12) as Cindy Lou, Claire Marshall (12) as Missy, and Elyse Bell (12) as Betty Jean, is described by viewers such as Olivia Yerkes (11) as, “the best performance from YLHS theater.” This spectacular performance will truly go down in YLHS theater history.

To kick off the show, Principal Varney introduces the entertainment for the class of 1958’s prom, The Marvelous Wonderettes. The lights switch over to the four girls as they gracefully harmonize, singing to the tune of the 1950’s hit “Mr. Sandman.” As the girls prove their vocal talents, it is made clear to the audience that one of the group members, Suzy, is dating the person in charge of the lights for prom, Ritchie Stevens. Once the girls have introduced themselves and sang some other popular songs of the time, they move on to their cheerleading performance that won them third place in the State Song Leaders Competition.

Moving away from their singing and dancing, the girls clue in the audience as to how they got the prom gig in the first place. Due to some implications with Billy Ray Patton, the lead singer of the glee club, and smoking cigarettes, the girls were asked to fill in for the suspended group. After the girls announce the unforgettable theme of the 1958 prom, “Marvelous Dreams,” they go on to sing one of the many medleys of the night. Not long after, Missy announces the nominees for Prom Queen. Of course each girl from The Marvelous Wonderettes had been nominated, along with Judy Carter, the girl with the mole in homeroom. Then the girls play a game of “dreamcatcher” to decide who would get to sing their solos first. Suzy goes first and sings “Stupid Cupid” to her prom date Ritchie. Betty Jean then sings “Lipstick on Your Collar” to her boyfriend Johnny, only to find out he had been cheating on her with Cindy Lou. Cindy Lou suitably sings “Lucky Lips.” Finally, Missy pronounces her love to Mr. Lee, the Songleader instructor, by singing “Secret Love.” Now it is time to pick prom queen. After tallying up all the votes, it is to everyone’s dismay that Suzy won. With Cindy Lou in favor of winning, the whole room is shocked, including Suzy. Suzy picks Ritchie as her prom king, and Suzy sings her solo as promised.

Act two begins once again with Principal Varney introducing The Marvelous Wonderettes, but this time it is at the ten-year reunion for the class of 1958. The girls begin by singing “Heatwave” but it is obvious that Suzy is missing from the group. Not long after, Suzy comes running through the door with a pregnant belly. She joins the girls as they sing, for old times sake, “Mr. Sandman.” Like ten-years before, Ritchie is working the lights, but now he is married to his past prom date, Suzy. Unfortunately they two had been going through a rough patch in their relationship, and Suzy was obviously upset about it. To help cheer her up, Missy insists they bring out the dreamcatcher, but to her surprise it was not in her purse. Instead Missy answers the questions Suzy answered on prom night, and the girls learn that she had been with Mr. Lee for the past five years. When Missy explains she had been waiting for a proposal, Cindy Lou makes it clear that she should wait for no man. Missy sings an empowering song and then finds Mr. Lee with the missing dreamcatcher. Intertwined in the infamous dreamcatcher is an engagement ring, and filled with excitement, Missy and the girls sing to celebrate. Next up to sing is Betty Jean, who was with the same boy who cheated on her ten years before. As she sang, she noticed her husband getting very close to Judy Carter. In Cindy Lou’s performance, she apologizes to Betty Jean and explains her lack of success in Hollywood, causing her to move back to Springfield and Marry the cigarette smoking Billy Ray Patton. Suzy is finally up to perform but is faced with self-consciousness and problems in her personal life. To help her get past her sadness, all of the girls join in so she can get through her performance.As an end to the vibrant musical, Ritchie blinks his lights to show Suzy that he still loves her.

At the end of the night, all problems are resolved. Cindy Lou and Betty Jean have finally put an end to their ten-year long feud, Missy and Mr. Lee are actually getting married, Suzy and her husband are rekindling their relationship. To end the show the girls sing a closing song titled, “Thank You and Goodnight.” As they walk off stage they exclaim, “See you in 1978!”

Overall, the girls of YLHS theater put on a show that the audience would never forget. With their amazing acting skills and perfectly pitched voices, they placed the audience in Springfield High School circa 1958. My take on this performance is a solid five stars. The Marvelous Wonderettes is a show you do not want to miss out on. BRAVO!