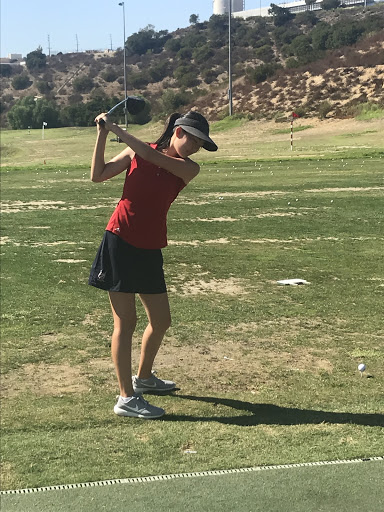 The Yorba Linda High School varsity women’s golf team has always strived for success and the 2019 season is not an exception to that. So far, with only three wins out of five matches, the team has plenty of room for improvement, but the players are highly motivated and determined to make this year one of their best seasons yet.

Under the direction of Coach Riggs (Staff), the varsity girls work hard at team practices when they aren’t playing their matches. They spend time improving both their long and short games so that they can excel in all aspects of the game whenever they play. The team has practice four times a week, but the girls take the time to practice on their own time to make sure that they are representing Yorba Linda High School to the best of their abilities.

The varsity girls are always looking for new ways to improve. Catherine Kang (12) said that she wants to “practice more on the range and possibly go to new courses to try new places out.” Her practice leading up to this year has been worth it, because she was able to lower her score by ten strokes.

Golf is a sport that takes a lot of mental concentration, but that doesn’t mean that the team doesn’t know how to have fun. Whether they are engaged in friendly competitions like trying to make it the closest to the chosen target and trying to make the most two putts, or as Esther Yang (10) says, “getting delirious by drinking coffee,” the varsity girls have a great time at all of their practices and matches. Esther Yang (10) says that her favorite thing about golf is “hitting the ball,” because just about every golfer can agree that there is nothing more satisfying than hitting a good shot.

The varsity team has had some struggles. Even though they put up their best fight at their match against Troy, Troy was still able to take the win. This, however, does not discourage the varsity girls leading up to the remainder of their season. One of their accomplishments this season was winning against their strong opponent, Brea Olinda. It’s clear that there will be many things to look forward to this season as the Yorba Linda High School varsity golf girls prepare to make the rest of the season a success.