Is Cheating getting Worse? 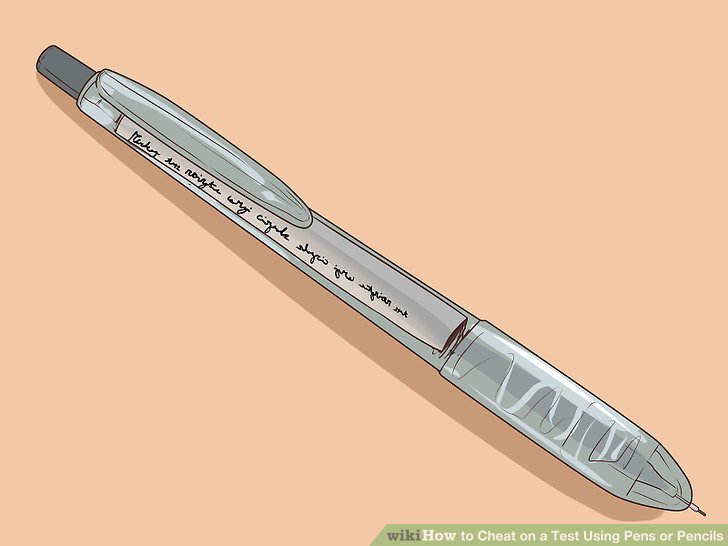 Ironically photo credits are given to WikiHow

Without naming any students, there seems to have been an increase in the number of teens cheating on their homeworks, tests, and quizzes. Specifically, when Donald McCabe, a professor at Rutgers University, interviewed 24,000 high school students, he discovered that a shocking 64% of students admitted to cheating on a test. Paige Richey (12) felt that “cheating wasn’t fair for the students who actually studied.” Not just the sheer amount of participants, but the methods in which cheating takes places has also evolved. Students are no longer just writing the answers on the back of their hands, but they are sneaking in answers through various ways. Some methods include rolling up a cheat sheet inside a ballpoint pen or saving math equations into a graphing calculator. As teachers and parents are developing alternatives to fight this epidemic, many wonder will cheating ever stop?

In 2011, seven students were arrested for cheating on the SAT. The SAT is a standardized test that most colleges in the United States utilize to determine a student’s eligibility of entry. The seven students hired a con-artist to impersonate themselves during the testing period. Even on the SAT, students are willing to take a risk. Not only cheating on the SAT, but there are several different forms of cheating. For one, plagiarism or copying another student’s homework. Most high schoolers are guilty of such scheme. Plagiarism and copying another student’s homework is counterintuitive as one won’t learn the material. At times, many teens forget that everyone of us attends school to learn, not to earn good grades. Another popular cheating mechanism utilized by 20th century students is bribery. Bribing someone to do one’s homework. Bribing someone to write one’s essay. Again, this type of cheating is counterintuitive as the student won’t learn the material.

Why has cheating gotten worse?

To be honest, there isn’t one specific cause for the increase of incidents in cheating. Ironically, one main contributor is the desire to thrive. Students cheat in order to earn a good grade. Especially with the growing push to get accepted into a high tier college or a stable career, teenagers are determined to never fail. This push for success also leads students to feel extreme testing anxiety and lack of confidence. In addition, cheating has gotten worse because of the perception that “they won’t get caught.” Once themselves or a peer was able to successfully be dishonest, more students are willing to participate in the act. As teachers are responsible for tens of kids, it is impossible to be consistently checking on everyone. Thus, as the term goes, “one bad apple spoils the bunch.” Finally, cheating may just be because of laziness. In a article on Edutopia, a college graduate simply explained that “[she] wanted to get good grades and didn’t want to work.”

What should be done….

Unfortunately, cheating is a problem that will forever haunt the halls of schools all around the nation. Still, even if cheating can’t be stopped, there are ways to control such behavior. Encourage the act of effort rather then grades.Maintain a stricter testing period in which no phones or other forms of electronics are allowed. And, most importantly, be available for help.