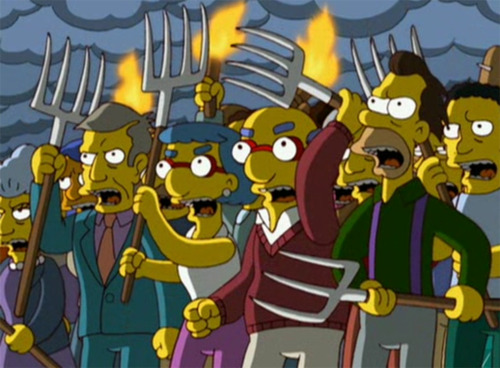 Modern day witch hunts are more then just pitchforks and torches. Photo credits to the ranteaterexpress

Recently, on Youtube, James Charles’ career was destroyed after a online feud with beauty blogger, Tati Westbrook. (More information is written on a different article specifically dedicated to the James Charles’ scandal.) As a result, the internet lashed out at his behavior by writing explicit comments on both his Youtube videos and Social Media posts. Some of the tweets and comments included messages threatening harm to both James Charles and his family. Other remarks spread awful rumors and gossips of crimes that James Charles didn’t even commit. Even supporters that once identified themselves as  “sisters,” exploited James Charles online with mean comments. Although James Charles’ alleged actions are disturbing and unforgivable, the constant harassment and online bullying needs to stop.

Witch hunting. A shameful piece of American history that included the persecution of innocent individuals over rumors and gossip. Even though witch hunts no longer exists today, social media portrays a similar dilemma. Today, the internet is used to verbally attack a person into harm and/or crime. Unlike the 1700s, the internet makes it easier to find information and spread false rumors. Even if the allegations aren’t true, anything posted on the internet will forever circulate the media. It is disgusting to watch as users are more thirsty for “the tea” rather then the truth. With a growing population of individuals being able to access the internet, online humiliation and bullying is easily accessible. Amber Li (12) feels that “social media witch hunting is a serious problem in the 20th century.”

Most internet users don’t even know they are contributing to the harassment. Even copying or retweeting a negative comment is considered helping the “mob.” Participants of the online social media witch hunt are called Internet trolls. These individuals instigate the witch hunt by either spreading rumors or commenting mean messages. As the witch hunt gathers more supporters, it becomes even more violent and explicit.

Unfortunately, people are blind to the effects internet trolling has on its victims. There has been multiple cases in which a rumor, spread online, circulates into the real world such as a school or workplace. Over time, the simple rumor or gossip becomes the source of bullying and harassment. In Brazil, a 15 year old teen, committed suicide after her ex-boyfriend spread rumors about taking intimate pictures. In O’ Fallon, Missouri, a young teen committed suicide after being bullied online about her body. There are several more cases in which a simple rumor or comment lead to self deprecation or suicide.

Social Media Witch Hunting is a very serious issue that should be emphasized amongst the younger generation. Because the internet is a virtual space, many individuals don’t realize the detrimental effects it may have on others.