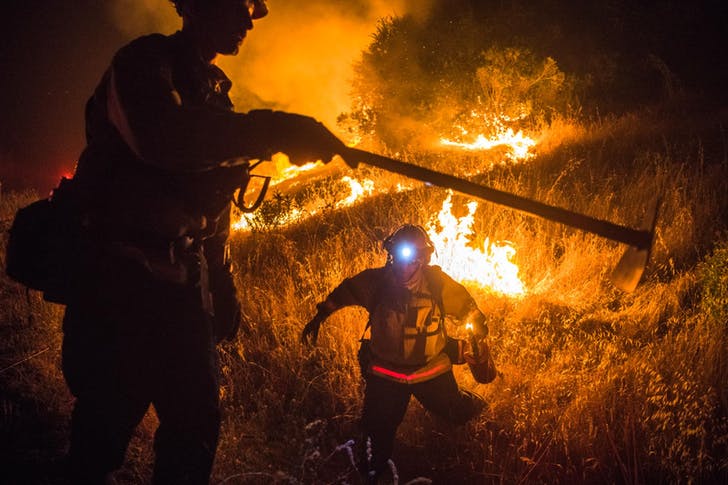 California firefighters do work to contain and extinguish the Ranch Fire near Upper Lake, California.

For those of us who live in California, it’s no surprise when we hear about a fire on the news. After all, they’re just about as common here as hurricanes are on the east coast. Given how dry it is here, it’s not hard to imagine why fires are popping up all over. Because of that, our state fire department is always hard at work to ensure that we Californians stay safe from this constant threat.

Unfortunately, that security may no longer be an option, thanks to our own President Trump.

Since January, Trump has threatened to order FEMA (Federal Emergency Management Agency) to no longer send any money our way if we don’t get our “act together.”

“Billions of dollars are sent to the State of California for Forest fires that, with proper Forest Management, would never happen,” Trump tweeted. “Unless they get their act together, which is unlikely, I have ordered FEMA to send no more money. It is a disgraceful situation in lives & money!”

In the past, FEMA has given financial assistance with over 20,000 damaged structures from fires that killed at least 89 just last November. The devastation California has faced hardly ends there. It’s no wonder we need so much help keeping our people safe.

Governor of California, Gavin Newsom, suspects that this funding threat may have something to do with Trump’s plans with the wall because of the dramatic pricing its construction requires. According to CNBC, he claims that the Trump Administration is “hostile to California’s values and interests” due to the White House’s “corruption and incompetence” regarding financial matters.

Regardless of the behind-the-scenes reason for the cut, it would inevitably result in millions of dollars of lost income for California fire departments. However, as the Sacramento Bee reports, the US Forest Service has accused them of overbilling for their services in fighting the numerous wildfires. This claim originates in the California Fire Assistance Agreement (CFAA), which started in 2015 and expires in 2020.

While it’s true that many fires do originate in human-populated areas, there are many more factors at play than just human recklessness.

“Fire, in some ways, is a very simple thing,” said Park Williams, a bioclimatologist at Columbia University’s Lamont-Doherty Earth Observatory, to the New York Times. “As long as stuff is dry enough and there’s a spark, then that stuff will burn.”

Like most of the West, California’s moisture comes from the fall and winter seasons, leaving the spring with only residual moisture from winter and the summers very dry. The dry vegetation then provides the perfect kindling for fire season.

Even beyond that, California also experiences Santa Ana winds, infamous for it’s dry, powerful gusts from the Great Basin, which no doubt plays a huge part in encouraging wildfires.

“Disasters and recovery are no time for politics,” Newsom tweeted back in response to Trump. “I’m already taking action to modernize and manage our forests and emergency responses. The people of CA – folks in Paradise – should not be victims to partisan bickering.”

However, regardless of whether or not the fires are indeed our fault, removing funds won’t do much to prevent fires. Without funding, more people will die as a result. I mean, really Trump, just listen to our pal Smokey: “Only you can prevent wildfires.” Cutting funds doesn’t really seem to fit into that.