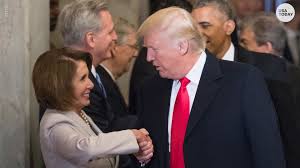 Newly appointed Speaker of the House, Nancy Pelosi, is being pressured by fellow democrats to begin the impeachment process of current President, Donald Trump. Although it is every Democrat’s dream at this point to see President Trump impeached, Pelosi has stated in a recent conference that “we’re not at that place [to impeach the President].” Trump has put the Democratic party in a difficult position after his past actions like the investigation of the Mueller report as well as ordering former White House counsel Donald McGahn not to testify before the House Judiciary Committee. The administration’s resistance is causing Pelosi and other House leader to question whether the administration can block the legislative branch. However, Senator Warren stated that “there is no political inconvenience exception to the United States Constitution.”

It takes a lot in order to impeach a President. First of all, charges against the President must be made and these charges are investigated by the Justice department of Independent council. Then, the house judiciary committee reviews evidence and drafts articles of impeachment. After that, the entire House of Representatives debates Articles of Impeachment and votes on them through a simple majority. From there, the Senate holds the trial and in order for the president to officially be removed from office, the Senate by a 2/3rds majority vote must vote against the accused.

Since the president’s term is almost coming to an end, and the new elections are starting, it is important for the Democratic party to start focusing on preventing him from winning the 2020 elections if they really would like to make a change. Currently, Trump is prepared to the fullest for his next election since he has a strong group of supporters despite his faults. Although Trump and Pelosi are not always side by side and have their many differences and dirty games, Pelosi is still worried that this impeachment might cause a great effect for the worse. Pelosi can only play midman for so long and will have to make a decision; one of what might be the most difficult in her career.

When ​Safia Khan (12)​ was reading about the matter, she felt that the decision Pelosi has to make “is definitely a difficult one and it might be better for the Democrats to focus more on strengthening their candidates for the next election in order to win, despite all of Trump’s faults.” Clearly, this possible impeachment is definitely one to be marked in history.