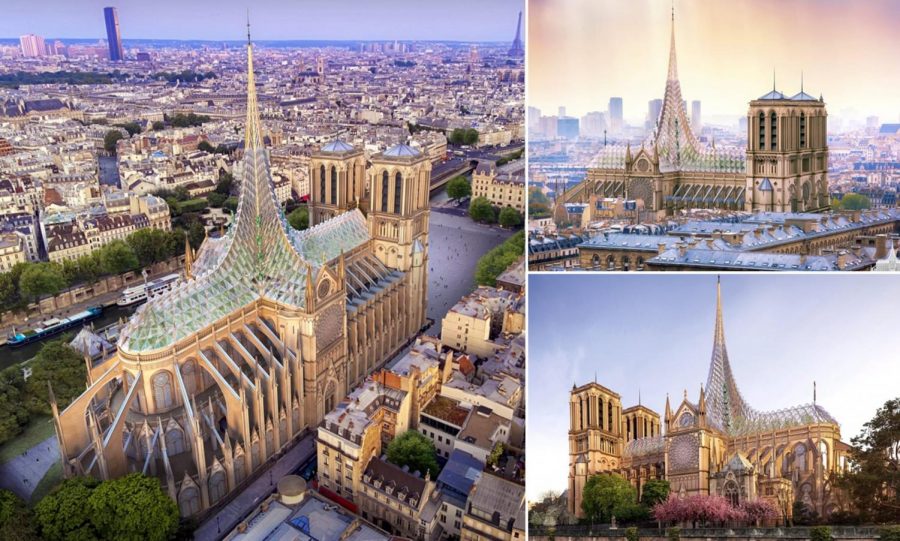 This eco-friendly dome design was proposed by architect Vincent Callebaut.

Tragedy struck France when Notre Dame, a 800 year old church, caught fire on April 15th, 2019. Fire broke out beneath the roof of the famed church, permanently damaging some of the most well-known features of the building, including the spire that crumbled over in the midst of fiery flames.

Amongst talk over what to do with the damaged aspects of the church, multiple architects have brought forth their ideas regarding what roof design should be put in place after the collapse of the spiral. One draft in particular has caught the eye of the public, due to its appealing character and multi-purpose function.

Architect Vincent Callebaut proposed an idea to create a fusion of “science, art, and spirituality” as he revealed his idea to create a new eco-friendly dome on May 9th, 2019. He further stated that the new architecture of the spire “evokes the rebirth but also the mystery of the cathedral and the resurrection of Christ” (PBC Today).

Dubbed as the Palingenesis project, the roof would also include a garden with natural air flowing through. The plan is to harvest a variety of different fruits and vegetables, and then consequently host a farmers’ market at the beginning of each week.

The ultimate design is intended to resemble something in which is representative of the times society sees itself in now, while also preserving those precious holy elements of the church that once existed for over 800 years.

Nevertheless, the proposal has been met with adamant oppositions as French senators insist that the damaged parts of the Notre Dame cathedral must be restored to to its previous state. They maintain their stance on how the building must be restored to be a complete reflection of how it once was, including the material in which it was made. And if any design is proposed with a material that was not present in the original building, then a presentation explaining the reasoning behind the change is required.

In response to these oppositions, Tatiana Lopez (11) says, “I understand this longing for the past that is being heavily experienced, but I think that when given the opportunity, why not just do something that will actually benefit the needs of today? An eco-friendly dome would be much more jaw-dropping and awe-inspiring than a reconstruction of the same building.”

The argument to be heard around town is between the traditionalists who insist on the reconstruction of the building to be a reflection of how to appeared before, and the modernists who are open to a more innovative approach to restoring the cathedral.