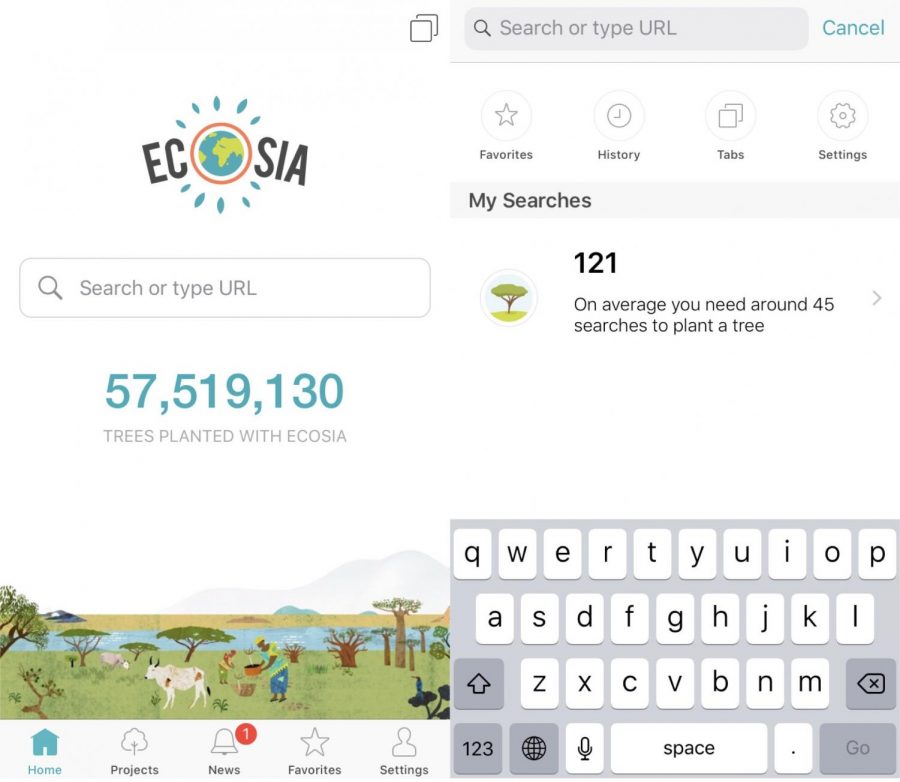 About every 45 searches results in a tree planted somewhere around the world, and Ecosia’s users already have planted a combined estimate of over 57 million trees.

As the decade progresses, saving the planet and becoming more aware about the effects of climate change seems to be justly promoted on almost all social media platforms and news outlets. However many are becoming nervous as to what exactly they can do to help out, as many of the options seems to require money.

There is an alternative.

Ecosia is a free application that ultimately, is a gamechanger in the current technology-based world. Almost identical to mainstream engines such as Google and Yahoo, Ecosia is a search engine that is dedicated to providing its users with a fast-paced web search system while also working to better the Earth’s environment.

Christian Kroll, Ecosia’s founder and CEO, developed Ecosia in 2009 after a business trip. After completing business school and traveling the world, Kroll decided that business should be more meaningful than just harvesting profit, and he decided to launch Ecosia (Ecosia).

The organization was originally based in Berlin, Germany, and have since planted trees all around the world in countries like Tanzania, Morocco, Indonesia, Ethiopia, Madagascar, and Brazil. But how do they plant the trees?

Around every 45 searches Ecosia users produce results in one tree planted somewhere around the world. Seeing as though most students frequently resort to Google to search for things like homework help, questions about everyday life, and entertainment, 45 searches is not by any means unattainable. Soma Shah (11) illustrates her opinion after downloading the application, “I was skeptical at first because I didn’t think it was going to work very well, but I was extremely surprised in the end to find out that there was almost no difference between Ecosia and Google. It feels good to use Ecosia because I know that even though I might not be able to donate tons of money to programs or go to beach cleanups every weekend to help conserve the environment, I’m still contributing something by using Ecosia.”

Ecosia makes their money purely from ads, meaning that the more you use Ecosia, the more ads you’re being shown on your browser, which results in profit for the program. Where does the money go? Planting trees. And to prove that they’re actually planting trees with 80% of their profit and not using the money for their own needs, every month Ecosia is committed to publishing their financial reports online for the public to view.

When compared to any other typical search engine, Ecosia runs no differently than the multi-billion dollar companies that create online search engines. But morally, Ecosia is dedicated to working towards a common goal that many people verbalize their concerns about: the state of our planet.

Little by little, each person that utilizes Ecosia to its fullest is saving the Earth one search at a time.