Stand Up To Harvard 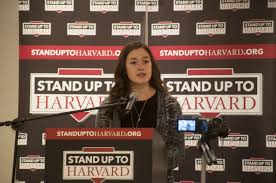 Stand up to Harvard has become a huge movement with support from across the nation.

Throughout our history many of our rights have been oppressed, whether that meant basic freedoms, equality for women, or even the freedom of speech. Due to this we have spent multiple eras fighting for all the rights that we experience today. Recently, Harvard has outlawed all same sex social groups that are affiliated with their school. This means that Harvard no longer has any sororities or fraternities.

This new rule has been the cause of a lot of controversy throughout the country. Not only are the students who attend the university angry, but also all of the school’s alumni, the greek alumni, and all the other chapters that have affiliations with the greek houses that exist at Harvard. Sororities and fraternities carry with them a long list of history, so I personally believe Harvard made the wrong decision by outlawing them. To outlaw them is to disregard the hundreds of positive contributions greek life has made to college societies and instead glorify a few mistakes.

Participation in greek life at any given school can range from eight percent to sixty eight percent. Jessica Ryan (12) says “when she goes to college [she] personally hopes to join a sorority as well.” At Harvard specifically, about a fourth of the students were involved with a sorority or fraternity. By taking away this greek life Harvard is not only taking away opportunities from it’s students, but also a place for women and men alike to build their intelligence, friendship, and leadership skills.

I understand where Harvard was coming from when they decided to ban same sex social organizations like sororities and fraternities, but I don’t think they went about it the right way. Now a days there are many issues that circulate around sexual orientation, yet it would have made more sense to make greek life more inclusive rather than just getting rid of the whole thing. They could have created new clauses that allowed for inclusion of all, rather than banning the system as a whole. Not all students choose to participate in a sorority or fraternity, but I believe that the should have a choice, rather than being forced to do one or the other.