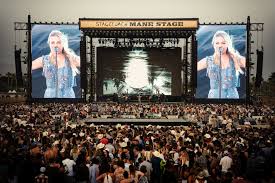 Many students from Yorba Linda spend their festival weekends in crowds like this one.

Every year as spring rolls around, along with it comes festival season. Here in Southern California two of the biggest music festivals are Coachella and Stagecoach, which both take place in Coachella Valley, California. Despite the fact that they take place at the same venue in subsequent weekends, the two festivals could not be more different from one another.

Coachella is a festival that is known about across the country due to it’s high attendance of celebrities, instagram models, and influencers. The festival consists of two weekends, often referred to as “Weekend 1” and “Weekend 2,” yet both weekends offer the same artists performing. Most of the artists at Coachella are rappers, pop stars, or indie singers. During the two weeks that this festival takes place social media platforms, specifically instagram, are flooded with pictures of those in attendance posing on green grass, in front of stages, with trendy food, or in front of the rainbow tower or the ferris wheel. Many people believe that Coachella is more about pictures, outfits, and the fact that you attended, rather than the music.

On the other hand, Stagecoach is relatively unknown to most people that do not live in California. It is only one weekend rather than two and it happens after the two weeks of Coachella. The most obvious difference between the two festivals is that Stagecoach is all about country music. Few to no celebrities or influencers attend this festival, most of the attendees are regular people who either came for the music or a party. Amanda Walion (12) says “Stagecoach is such a chill environment, everyone just enjoys themselves all weekend.” Stagecoach, often nicknamed “Ragecoach” most definitely is more of a party scene than Coachella. At Stagecoach alcohol is sold throughout the venue and can be taken anywhere, where as at Coachella it is only sold in designated areas and has to be consumed in said areas. While there is often lots of pictures that surface on social media from Stagecoach as well, the festival is more about enjoying the experience than pictures and social media. Especially since by the third festival weekend all the green grass has either turned brown or into dirt, although dirt is rather fitting for a country music festival.

Both festivals offer the option of camping on festival grounds, yet only Stagecoach allows you to bring in an RV, where as at Coachella you either have to camp in your car or a tent. Stagecoach also allows you to bring two cases of beer, or the equivalent of, if you are camping and has no restrictions on the number of coolers you bring, yet Coachella restricts campers to one cooler and one case of beer. Personally, I believe this has something to do with the type of people that attend the different festivals. The differences in personality and respectability show after the weekend ends as well since Coachella campers leave the grounds littered with garbage and debris, where is Stagecoach campers leave clean camping spots with neat trash bags left in their designated areas.

If you are interested in attending a festival her in Southern California, both Coachella and Stagecoach are great options. I think it is important to consider what you hope to get out of the weekend before you choose which one you want to attend, as well as what kind of music you like. Regardless of which festival you attend come prepared to have sore feet, an aching back, and extreme exhaustion at the end of the weekend.