The Boycott on Chick-Fil-A 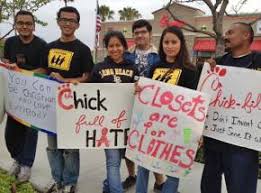 The boycott is just another pointless outrage stemmed from an unjust double standard.

To start, it isn’t unjust to be Christian. Simply donating to Christian organizations is not a valid reason to call for a boycott. However, it is the fundamental right of any American to engage in whatever peaceful political action they desire to support their personal views. The heinous and unreasonable logical fallacy behind the boycott is that the Salvation Army and FCA are both incredibly charitable donations, and thus, receive donations from all over.

In the past the Salvation Army and the Fellowship of Christian Athletes have provided aid and services to millions of people. The Salvation Army has members providing aid and relief to people across the globe, especially after disasters and other crises such. Each year, the Salvation Army spends billions of dollars assisting people across the globe, more good than the boycott will ever accomplish. Moreover, the claim that the Salvation Army is anti-LGBT is similarly illogical as, according to the Daily Caller, the Salvation Army has spent millions providing relief to LGBT communities, giving transgenders and homosexuals shelter in areas like Las Vegas and Winnipeg where they might be particularly vulnerable to rejection, discrimination, and violence. The FCA is similarly charitable. On our very campus, they have a club to spread positive messages, usually revolving around Christianity. They have athletes sign pledges to stay away from drugs, alcohol, and other delinquent activities.

Personally, I believe that donations to such organizations should be commended because they are dedicated to noble actions that provide practical and pragmatic assistance. I can comprehend that because Christianity ardently champions the traditional family over LGBT communities, people would oppose Christian organizations; however, these two organizations are incredibly charitable and provide life-saving relief to people across the globe. The donations would only benefit the world, and the actions enabled by the donations are bigger than political and personal disputes.

Moreover, because those organizations are such charitable organizations, they receive donations from corporations everywhere. For example, Amazon, Home Depot, American Airlines, Bed Bath and Beyond, and hundreds more corporations have donated to either one of both of these organizations. Despite the widespread support for these organizations, the boycott has only been directed at Chick-Fil-A. It demonstrates that the boycott is simply because Chick-Fil-A is a Christian Corporation and thus, contradicting the fundamental ideology of the LGBT community. If people wanted to boycott because of donations to these charities, then all those other organizations should similarly be subjected to the same boycott.

This is a double-standard used to target Chick-Fil-A because Chick-Fil-A has Christian beliefs that run counter to LGBT values. Personally, I am not Christian, nor do I believe in discriminating against anyone, especially minorities; I do, however, support the actions of the Salvation Army and the FCA. To boycott an organization simply for financially enabling these organization demonstrates the boycott’s fundamental opposition to donations to charitable organizations. Moreover, the boycott emphasizes some sort of false sense of moral superiority over Christian values, or why else should Chick-Fil-A be penalized for their personal beliefs?

Instead of calling for a boycott against corporations and individuals that donate to charitable Perhaps more can provide clothes and food for the destitute, or go to crises-ridden third world countries and offer aid, or set up  shelters for LGBT members in areas where they are susceptible to danger, or maybe join the Salvation army altogether to pitch in the effort and incite actual positive change.

Despite substantial public attention, the boycotts have produced almost no real effect as Chick-Fil-A has grown approximately 15% annually in the past few years, ranking as the third largest chain in its industry.