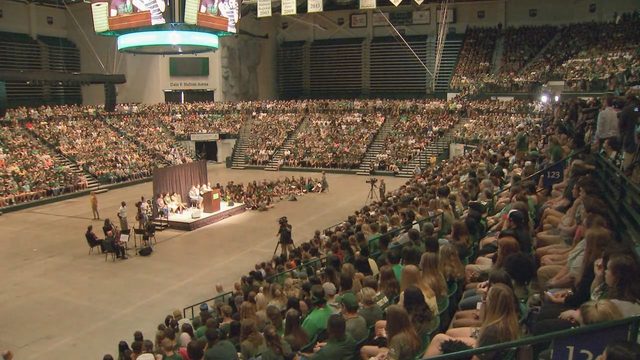 Students gather for the vigil held at UNNC.

On April 30th, 2019, the University of North Carolina, Charlotte (UNCC) had a shooting on their campus. Such a traumatic event caused shock among the entire university.

The shooting took place in a classroom, where former student Trystan Terrell, 22, started firing at students in the room. One student, 21-year-old Riley Howell, attempted to stop the shooter by throwing him off balance and tackled him down to prevent further fatalities. Tragically, he and 19-year-old Ellis Parker were killed by the shooting and four other students were injured. These students were 19-year-old Drew Pescaro, 20-year-old Sean DeHart, 20-year-old Rami Alramadhan, and 23-year-old Emily Houpt. In the shooting, it appeared as though Terrell shot at a specific target, aiming mainly at a group of twelve students sitting at a table. However, the police have not been able to identify what Terrel’s motives for his actions against the students of UNCC.

All students were evacuated One student recounts he barely realized the shooting was taking place since it was so unexpected. After the shooting, a parent commented, “I really thought that college was supposed to be safe for kids.”

When the shooter identified himself to the police, he was arrested. Search warrants were filed by the Mecklenburg County Court. In Terrell’s apartment, officers found seized among other things paper targets, three handgun magazines, six boxes of ammunition, and a magazine holder. His gun was legally purchased. Terrell was charged on two counts of first degree murder, four counts of attempted first-degree murder, as well as counts on bringing and using a firearm on school property. His trial is set to June 13th before the Supreme Court.

With the graduation just a few days after, the campus mood turned from anticipation to grief. One of the four students injured, Emily Houpt, will be the first to walk across the stage on Saturday for UNCC’s commencement ceremony. Both Howell and Parker will receive degrees in memoriam. Howell, having also been an Army ROTC cadet, was also awarded posthumously the ROTC Medal of Heroism for his heroic attempt to stop the shooter. Allison Zambrano (12) argues that “while this student’s act was very brave, and he definitely should be deemed a hero, it is still disgusting to see that these students, whose sole purpose should be getting an education and bettering their future, feel the need to risk their own lives in the one place where students should feel safe.”

Furthermore, a candle light vigil was held on the following Wednesday, attended by thousands of students. Finals were also postponed through the next Sunday.

Most recently, one of the victims, Drew Pescaro was released from the hospital earlier in the week. However, on May 22, he returned to the hospital, needing more time to recover from the gun-shot wounds.