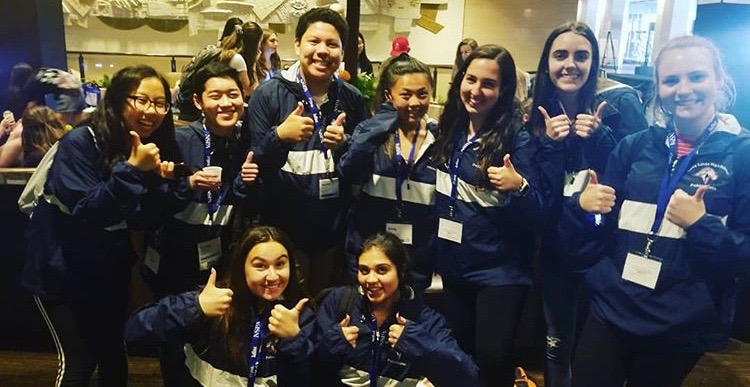 Newspaper and Yearbook students attended the JEA Conference at the Hilton in Anaheim.

On April 26-27th, part of the newspaper and yearbook staff at YLHS attended the JEA Conference at the Hilton Hotel in Anaheim. Among the 5000 students from across the United States who attended this year, nine YLHS students took part in the conference: Grace Kim (12), Emily Ito (11), Delaney Pietsch (12), Zachary Ninomiya (11), Emma Khamo (10), Malieka Khan (11), Gabby McCutchan (11), Stephen Serrano (11), and I. We were all accompanied by Mrs. Shay (staff) and Mr. Shay.

Since this was the first time that the publications had ever been to this event, the students were uncertain what to expect at first. On the first day, we started off by attending a lecture discussing various ways to boost creativity. From drawing chimeras of different animals to wandering throughout the hotel searching for pictures waiting to be taken, we all enjoyed having a chance to think outside the box.

Later in the day, we went to see multiple booths featuring a number of colleges throughout the country that offer journalism programs. On top of college booths, several publishing companies were present with displays of various yearbooks and newspapers from other schools. Malieka Khan (11) recalls how “the ideas they gave… inspired [her] so much for next year and made [her] excited to implement them into our newspaper. “ She hopes it will “make it more enjoyable for the students of YLHS.”

The next day, we attended four one-hour presentations. Due to the amount of options we had, all of us split up to have a broader perspective of the overall conference. Through the presentations, each journalist was able to learn ways to tell an effective story, to engage an audience, to write effective captions, to create an intriguing podcast, and to avoid writer’s block. As cartoonist for The Wrangler, Zachary Ninomiya explained how these courses were his favorite part of the whole conference since “it allowed [him] to learn about the different aspects of journalism.” He was also able to gain “new ideas and suggestions as well as try things that [he] would not normally do.”

After attending four hours worth of presentations, everyone went to lunch and sat to discuss what we had learned that morning. Students also had growing anticipation for their approaching contests. Stephen Serrano recounts that he “was nervous, especially because [he] had just found out the day before that [he] would be doing a contest, so [he] did not have time to prepare beforehand.” Apart from Stephen, the rest of us had somewhat prepared; however, none of us actually knew what to expect. No one from Yorba Linda High School had any previous experience with this particular conference so the experience was entirely foreign.

At 4PM, each student went to their contests. An hour later, I was the first to have finished. Slowly, everyone else followed until, two hours later, everyone had finished. Most were confident, others uncertain, but we were all relieved. Stephen emphasizes that “it was reassuring to know that everyone else was nervous, just like [him. He also] said he wouldn’t change anything since [he] did his best to prepare, considering the circumstances.” My contest consisted of knowledge of current events and headline writing. Two of the yearbook staff members had to write captions for a yearbook spread. Emma wrote for Sports; Delaney, for Academic. Zachary drew an editorial cartoon which won him 1st Place overall.

The other half of the students had to write articles of different categories. Malieka wrote a  review for which she received an Honorable Mention. Emily wrote a commentary piece for which she received 2nd Place. Gabby wrote for editorial writing; Stephen, feature writing; and Grace, newswriting for which she also received an Honorable Mention. Having come in with no expectations nor knowledge of the competitions, it’s incredible for each of these students to have received such commemorations from the very start. For anyone interested in a career in journalism, attending this conference was an amazing opportunity to delve deeper into how to become a better writer and reporter.