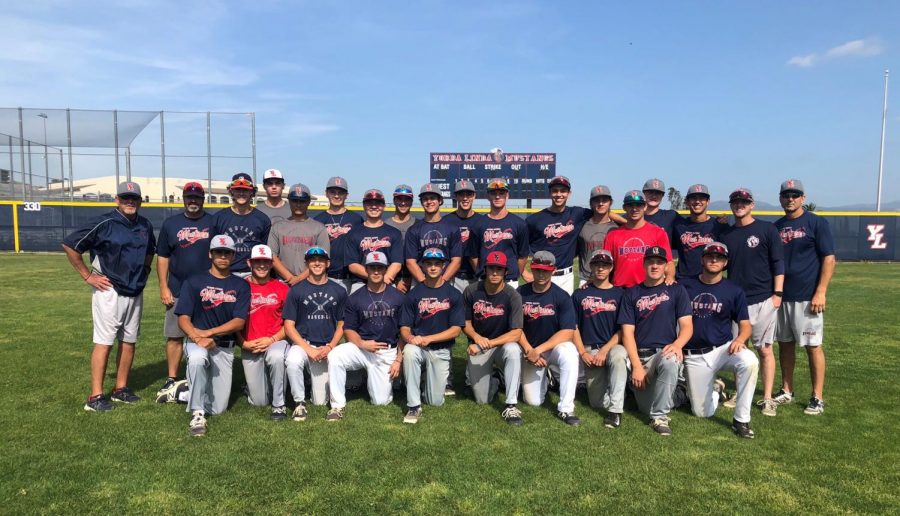 This year the Yorba Linda High School baseball team has had one record making season. Each member of the team had something to celebrate about by truly working their hardest to pull in every win they took. Without a doubt, this season has been an important one for the team with the many memorable moments made each time the team was together. Yorba Linda High School’s baseball program is getting better in every way they can. The players all hope that in the future this school will become a powerhouse in baseball.

The frosh team had one wild season. The players had only been together for one season, but now team members say that there is a strong bond with each other. They all started to learn more about what they could improve in and where they work best in. Zachary Denison (9), player #32 on frosh, says, “I think we came together and always knew how to cheer each other up. I can consider the other guys my family after one season together.” Even if there were some losses, the fun they had at practice made up for it. Next year, the players hope to prove how much better this school’s baseball program has gotten.

The junior varsity had one exciting season with only one loss in league. They had taken home first in league and were the first time in school history to do so. The team even beat Villa Park High School which had shown how the junior varsity team has really pulled through this year. Luke Villanueva (11), player #19 on junior varsity, comments, “It’s always great when you can beat the better teams. It just shows your team your character. I guess now we’re the better team.” It was one exciting ride for the team, with scores of  7-1 in league and 15-6 overall. There was a lot of success on the field for the teammates. Winning has really brought the team together this season.

This was one amazing season for varsity, the team had become the first team to make it all the way to C.I.F. playoffs. It was one huge success for everyone on the team. The boys had improved in every aspect they needed to compared to last year. Everyone worked hard together to achieve the best. A winning record was made this year and every player was excited to be apart of this school’s history. There was a lot more experience on the team this year and everyone had really stuck together as a team. They were always picking each other up and doing their part to help get more wins. Ricky Lane (12), player #21 on varsity, stated, “All that hard work, determination, grinding, and offseason finally paid off.” The boys have played better than before and are only getting stronger than ever. Dylan Strong(12), player #24 on varsity, was honored to be this year’s team captain and lead the team to C.I.F. For next year’s team captain, Dylan Strong(12) says, “Have fun with it, get to involve disciplining these guys, I forget I’m playing baseball. put it all into perspective.”

The friendships on the team will always be a lifelong brotherhood. Most of them had been together since little league, but new players coming in such as Ryan Brech(10), player #17 on varsity, Brandon Schuetz(11), player #14 on varsity, and Nathan Waugh(11), player #3 on varsity, all weren’t so sure if they would get the same vibes from the older players. Not too long after, they felt so easily accepted as a brother and will deeply miss the seniors as they leave for college. Every season the boys play together, they get even closer to where nothing tears them apart. The junior varsity friendships were getting even closer. At every game, the boys would cheer on one another when they were out on the field.  The frosh team always had each others’ backs, win or lose, nothing could bring a bad vibe to the team. Everyone was always in a contagiously positive mood at practice withthe boys’ constant bright smiles on and off the field. Everyone agrees there is no greater bond than one found within this team.

Ever since freshman year, the seniors all had grown closer to one another. They all are ready to pick one another up. The seniors are all sad to be saying goodbye to Yorba Linda High School, but they’re all going to remember how this team has made them better as a player and as a person. Coach Stine(Staff), the head baseball coach, stated, “This is a very special trip you all have taken me on the past 2 years. I know there are great things that lay in your future. Thank you boys for all you have done for Yorba Linda Baseball and me.” The time spent on the field will always be important to the boys. The senior players will be missed, but their legacy will forever be remembered by the younger players keeping their impacts.

After one thrilling season for the boys, they are excited to make their mark in Yorba Linda High School’s history as the first varsity team to make C.I.F. playoffs, the team to hold the team’s win record, and the first junior varsity team to win league. Soon, Yorba Linda High School’s baseball team will become a powerhouse on the field. For now, the team is a powerhouse in brotherhood-like relationships.

This year’s varsity baseball players and coaches have offered advice to the incoming and freshman players. Dylan Strong(12) says, “Don’t slack off its really easy to slack off with friends but you gotta learn to lock it in.” Luca Licata(12), player #7 on varsity, stated, “Make sure your teammates can rely on you, don’t let your time on the field go to waste.” Cole Smith(12), player #32 on varsity, says, “Gentlemen, sauce and getter done.” Ricky Lane(12) says, “Make sure to execute everyday.” Blake Wink(12), player #16 on varsity, says, “Always give 110% on the field, you should never let up.” Jacob Cochran(12), player #18 on varsity stated, “Work hard and keep grinding.” Jake Del Crognale(12), player #28 on varsity, said, “Don’t be an I-guy, but have fun. Play loose, we practice hard but we play harder so don’t slack off.” Sam Mueller(12), said, “Contribute in any way to help.” Ben Miller (12), player #11 on varsity, said, “Work hard, they’ll recognize that for sure. Don’t complain, do what you got to do.” Garrett Paschal(12), player #10 on varsity, said “Become friends with everyone. Don’t be scared to show your personality to the guys, when it comes to game time it’s all family out here.” Nathan Waugh(11) says “Pick up your teammates if someone messes up just help them out.” Adam Perry(11) stated, “Never stop working your hardest.” Luke Villanueva(11) stated, “It’s a great experience being on the team. Remember to work hard.” Ryan Brech(10) stated, “Just believe in yourself and don’t let others get to you.” Coach Robinson(staff) stated, “Play your hardest everyday, learn how the system work and mainly trust yourself.” Coach Stine(Staff) says, “Be aggressive, play hard, slow the game down and have fun doing it.”