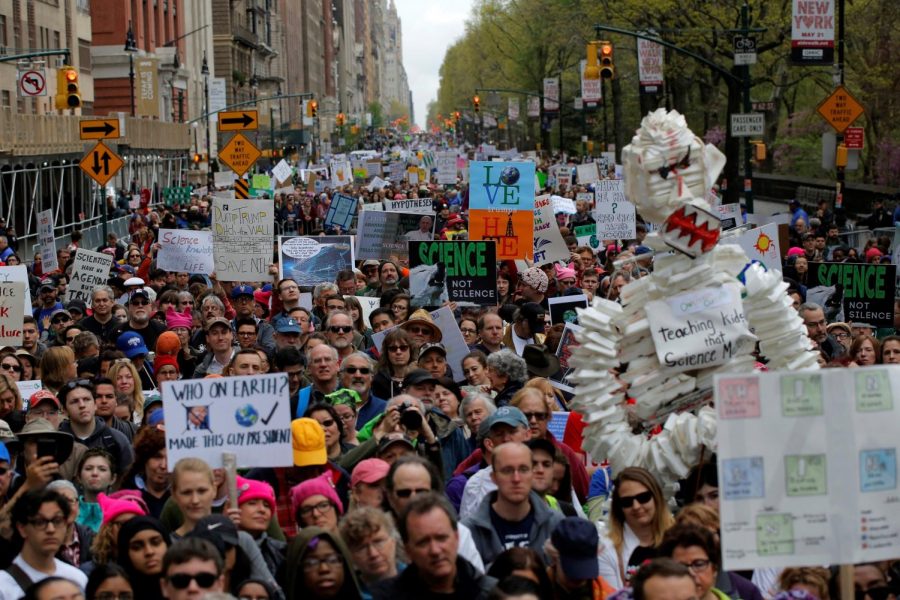 Protestors took to the streets for the Science March on Earth Day.

Monday, April 22nd was the 49th celebration of Earth Day. Countries, cities, and communities all around the world participated in all sorts of creative and meaningful ways. Now the world’s largest secular observance, the day was first created by a U.S. Senator from Wisconsin, Gaylord Nelson, in 1970. He, along with other supporters, intended to further the movement for the environment.

By the end of 1970, Earth Day contributed to an awareness that led to the creation of the United States Environmental Protection Agency and the passage of the Clean Air, Clean Water, and Endangered Species Acts. Although the environment has and still is the main focus of the movement, it was also originally created in order to support other causes such as civil rights, women’s rights, and peace. To this day, Earth Day is a symbol of representation for minorities, the poor, and others that are least able to protect the earth yet most heavily affected by the consequences of pollution and global warming.

In honor of the traditions and history of the day, people across the earth rallied together against global warming and pollution. One of the most notable protests was the die-in organized at the Natural History Museum in London, where hundreds of supporters of the organization Extinction Rebellion raised awareness about the existential threat of climate change by lying down inside the museum.

Unfortunately, the mayor of London, Sadiq Khan, criticized the protest and others like it by urging the protestors to “let London return to business as usual.” His response sparked controversy, as many others countered it by how ineffective and dangerous it would be to simply ignore climate change. Extinction Rebellion also continued the protests through their LA branch, where protestors climbed the globe outside of Universal Studios Hollywood and glued themselves to it.

Museums, cities, and parks also showed their support for Earth Day and the environment by hosting Earth Day Celebrations that included arts and crafts, performances, activities, environmental education, and parades. For example, in Copenhagen, Denmark, Earth Day United hosted sessions of drum-playing before a March for Science. Meanwhile, the Empower Earth Day Celebration in London had over seven bands performing to “raise funds for British charities and groups fighting climate change.” The event also had “environmental speakers, dance, yoga, shamans, a vegan cafe, and more” (Empower).

When asked about his opinion, Raymond Nguyen (11) explained “that earth day is important because it helps inform us and the rest of the world about the global biological and ecological issues that we are facing. I think that we first need people to address the problem at hand before any real change can happen. Although awareness doesn’t solve global warming or melting ice caps immediately, it alerts the government that they need to mitigate the issue.”

From protests to marches to celebrations, Earth Day was truly an eventful and meaningful day for billions of people everywhere. People from all corners of the earth showed their support for the earth that we all live on- showing just how important it is to combat climate change and protect the environment.