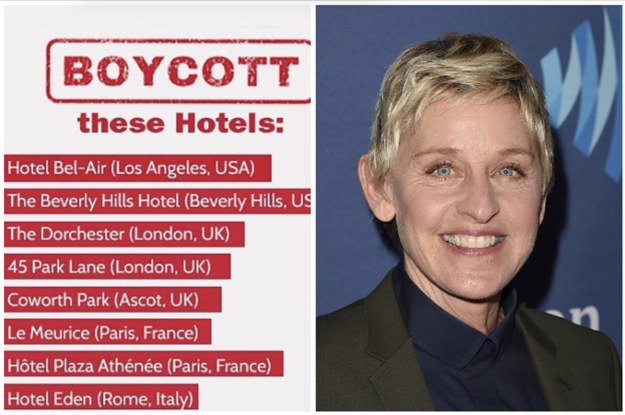 Comedian and LGBTQ advocate, Ellen Degeneres, took to her instagram and posted a list of hotels owned by Brunei. She asks her followers to spread the word and boycott these hotels.

Brunei, a small nation in Asia on the island of Borneo, implemented a harsh criminal law on April 3, 2019. The new Islamic Law allows death by stoning for gay men or adulterers and amputation for theft. The law passed despite much international opposition and has been met with extreme protest.

Homosexuality has been outlawed in the small Asian nation for years, but the brutal punishment was only recently introduced. The nation’s Sultan, Hassanal Bolkiah, one of the wealthiest royals in the world, announced that the country would practice Sharia Law in 2013.

Bolkiah first implemented the Sharia Law as a way of creating a strict, homogenous Islamic society. Although, the new government hesitated to implement the Draconian laws during its initial phases. International outcry delayed such severe punishment for a period time. For the following years, homosexuality was met with fines or imprisonment. The death penalty remained legal in the nation, there has been no executions since 1957.

While criticism from surrounding nations remained persistent, the government decided to move forward with the implementation of their barbaric laws. While the main national focus has been on their anti-LGBT community laws, punishment for adultery, rape, sodimy, abortion, insulting the Prophet Muhammad, female requests for divorce, amongst other state crimes has also increased in brutality.

The country is currently facing extraordinary condemnation. Everyone from politicians, to students, to celebrities are fighting to have the laws reversed. Many attest to their disgust with Brunei’s decision including Jacob Viveros (11), who asserted his “strong opposition and intense upset.” American talk show host and openly gay women, Ellen Degeneres, and other celebrities took to their social medias, urging their followers and fans to boycott any hotels owned by the Asian country.

International criticism is relentless. Other nations feel that their penal code is in direct violation to their human rights obligations. Phil Robertson, a director of non governmental organization, Human Rights Watch, explained to The New York Times that “Brunei’s new penal code is barbaric to the core, imposing archaic punishments for acts that shouldn’t even be crimes.” Other nations are being urged to cut ties with Brunei as well as plead with the nation’s ruler to suspend its harsh punishment.

Despite the immense international protest and condemnation, Brunei defended their decision and it is becoming apparent that there is little intention of conceding to the public’s demands. The prime minister’s office explained to The New York Times that they are “a sovereign Islamic and fully independent country and, like all other independent countries, enforces its own rule of laws.” The claim that they are criminalizing acts against the Muslim faith and “educating, respecting, and protecting” the rights of individuals.

Overall, the Brunei’s latest move has been met with overwhelming objection from nations across the globe. Many are working together to find a way to terminate the inhumane laws and fight the criminal discrimination against the ethnic, religious, gender, or sexuality minority groups.