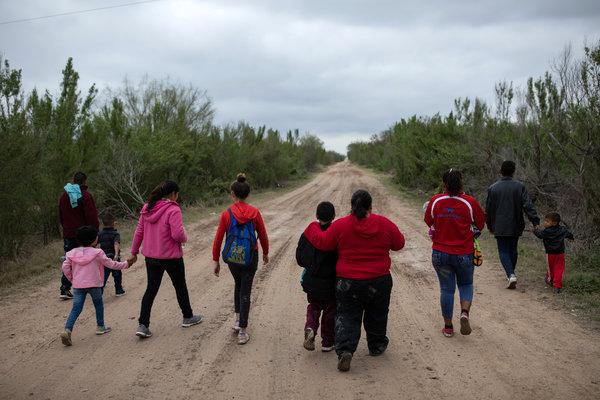 Immigrants making their way to the US-Mexico Border.

After the huge debacle of the widely publicized Migrant Caravans, the number of immigrants crossing the border set new records for who the US has let in. But is the system being pushed beyond its capacity?

Once full of single men and fathers hoping to get jobs in America and send money home to their families, migrants have now grown to be full families, coming up to the border in large groups, with children and even babies.

But what caused the change in the type of travelers? Why are these migrants willing to risk the dangerous journey to the north for the possibility of a life in America?

Well, according to the New York Times, the root cause of the issue lies in poverty. For years, Mexico and Central American countries’ poverty rates have skyrocketed. Any tiny wages they earn are far better than anything they could scavenge back in their home country. The whole point of traveling to America, even with the risk of travel and crossing the border illegally, is to provide for their families. This was even the intent back when far less full families were crossing together; the men sent the money they earned back to them so they could provide for themselves more than they could when he was gone. Not to mention the growing numbers of murders and gang violence. That’s enough to make any family willing to do anything to protect those they love.

Unfortunately, because of the influx of migrants wanting to earn their wages, the US is becoming… rather full. This country has always had a rather large population. It even increases with legal migrants still.

From around a year ago, the number of unauthorized migrants who cross the border have nearly doubled, showing that, despite Trump’s efforts, reaching about 2,200 a day by the busload, they have not been persuaded against violating the American immigration laws and, if anything, seem to be more determined to get over here to restart their lives on American soil.

“The system is well beyond capacity, and remains at the breaking point,” Kevin K. McAleenan, commissioner of Customs and Border Protection, told reporters in announcing the new data on Tuesday.

At this point, America must acknowledge that there is an immigration problem. True, the nation was indeed founded on a healthy supply of migrants looking for a chance to start a new life in a daunting, unknown land. But at some point, there is a line that must be drawn; there are immigration laws for a reason. The country can’t just accept any person or family that comes up to the border asking to come in. There are regulations that must be respected.

If the US continues to allow floods of people to enter the country without any gates, there will not be enough resources to provide for them, and not to mention US citizens and immigrants who waited in line to gain access to the country legally. It is simply not fair to those who followed this country’s laws to allow unlawful individuals to enter the country and cut the line they refuse to wait in.

Many hope that this concern will be hindered as the wall reaches its completion, but others believe that it will be futile and only result in financial problems within the US.