The Relationship of Parent and Child Throughout the Years 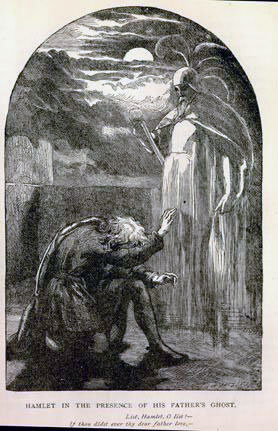 Hamlet meeting with his father's ghost,

As time progresses, society changes its views on what was once considered the norm. One of these things is the role of the parent and how they’re involved in or how they influence their children’s lives.

Should children respect and obey their parents without question? Should a parent have complete access to their child’s life? These are questions that many people, particularly teens, are taking a different stance on than how their parents would have if asked about the same topic.

Students at YL have their own varying stance on this topic, some following a more traditional standpoint, some seeing it more liberally, while others are stuck in between on the matter.

This particular topic arose in Mrs. St. Amant’s AP Literature classes, who have just started their journey into Shakespeare’s Hamlet. Prior to beginning the book, St. Amant wanted her students to figure out what their stand point is on several questions, two of which relate to Hamlet’s relationship with his own, albeit complicated, family matters.

(For those who have not read Hamlet, simply imagine The Lion King, but in Middle-Aged Denmark.)

These two questions are as follows: 1) Does a child owe allegiance to their parent? and 2) Should a parent have total access to their child’s life, even at the cost of invading privacy?

“I said it’s conditional,” stated Isaiah Seo (12) in response to the first question, “not every child should have it. There are parents who don’t take proper care of their child, but I think if your parent is providing for your needs and has your best interest in their heart, then you do owe your parents allegiance. They did provide for you and they are providing for you; they’re providing the roof over your head and the clothes on your back, basically all the tools you need in early life. Even as an adult, you still owe something to our parents because of all that they did for you.”

As far as how much access a parent should have in their children’s lives, Jordan Tatreau (12) provides her own insights: “I think parents should try to foster a trusting relationship with their kids where the kid isn’t afraid to tell them anything. Invading a child’s privacy just creates feelings of anxiety, mistrust, and in the end just creates sneakier kids who feel more isolated. I can understand why some parents feel that they have to resort to these means because they’re scared of what can happen, but I still feel privacy is important.”

According to Psychology Today, children should have a right to their own privacy. It’s understandable for a parent to be worried about their child. In certain cases, getting involved could be beneficial, say if drugs or suicide is involved. But now, a growing number of people don’t believe that a child’s life is owned by their parent.

“By invading their privacy,” Jordan continues, “they have found out something the child was not emotionally ready to disclose and that child is now in a potentially dangerous environment. I just feel that parents should make an effort to connect without resorting to snooping through diaries and text messages.”

But if this is how students in 2019 view the issue, what did it change from?

Nowadays, society doesn’t immediately shame a couple for not having a child. Whether or not one decides to carry on their family tree is completely voluntary and up for debate. This way of thinking makes raising a child deliberate and (usually) full of thought, allowing for more parents who actually care about how their children end up and live happily.

Unfortunately, this was not always the case. When two people got married, it was expected of them to have a child, preferably soon. Think back to all those movies or TV shows that have the parents of a happy couple constantly asking them when they’re going to have kids. A child-less couple would have been a huge social stigma. Because of this, couples could have children simply due to the social pressure, rather than wanting to love and care for someone they brought into this world, leaving parents unfit for the role they have placed upon them.

“It may seem different, but it’s really still the same,” states St. Amant. “The tools have just changed.”