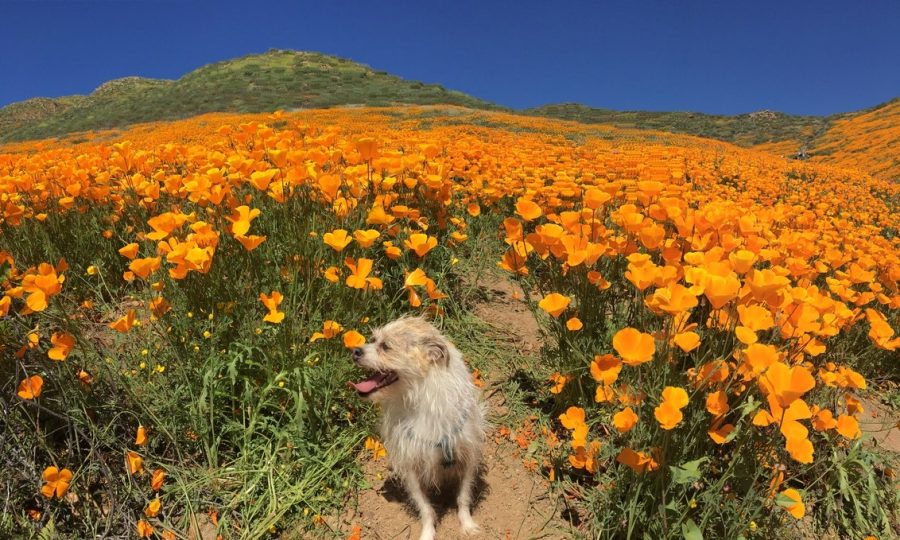 The poppy super bloom in California has attracted thousands of visitors, including this canine visitor pictured above.

The hills are alive with the sight of millions of poppies and the sound of thousands of tourists. Late-March through April has always been prime poppy season, but for a California in the midst of one of its rainiest winters in history, poppy fields have experienced a super bloom. These vibrant, abundant wildflowers have attracted thousands of tourists to flock to poppy fields such as Lake Elsinore in hopes of capturing a perfect picture for Instagram.

The most popular poppy fields of California include the Antelope Valley Poppy Preserve, Walker Canyon, and Lake Elsinore, the latter of which received an overwhelming 150,000 visitors in just one weekend, according to NPR. The freeways were filled with bumper to bumper traffic as tourists swarmed the area, eager to bask in the wildflowers and heavily stressing the locals in the area.

As Californians gush about the beauty of the poppies, Instagram feeds are being flooded with images of the scenery: seemingly never ending hills and fields of brightly colored orange, yellow, and purple hues, so abundant that the individual flowers are perceptible only as flecks against the vivid green grass.

The desire to join the trend and post a spectacular photo on social media appears to be the most driving factor, especially for Juliana Kim (11), who comments, “I visited Lake Elsinore a couple of weeks ago and had the best time. The sight of all the poppies–truly breathtaking. It was like something straight out of a movie, with the ideal weather, bright colors, and even birds chirping in the background. But I only knew about it through Instagram and Twitter, where I saw dozens of people posing with the flowers.”

While the poppy super bloom has boomed the local economy and local tourism industry, it has also caused burdens on the locals of the area and the flowers themselves. Locals have complained of public safety issues due to traffic and overcrowding, and the thousands of tourists descending upon the fields daily have stressed officials, who have, according to NPR, contacted California Highway Patrol and pleaded, “Our city is not made for Disneyland size crowds.”

Local officials and state park rangers have also been exasperated with trying to maintain park rules in the interest of public safety and preserving the poppies. Visitors have been going off the trails and venturing directly into the flowers in pursuit of the perfect shot, according to NBC Bay Area. A helicopter also recently landed amongst the poppies, much to the distress of officials who fear that this excessive activity and violation of the flowers will quickly shorten their beauty.

Before travelling to experience this once-in-a-decade poppy super bloom, be prepared to wait in long lines, obey park restrictions, and marvel in the beautiful nature of California.