Victory at the Angel Stadium 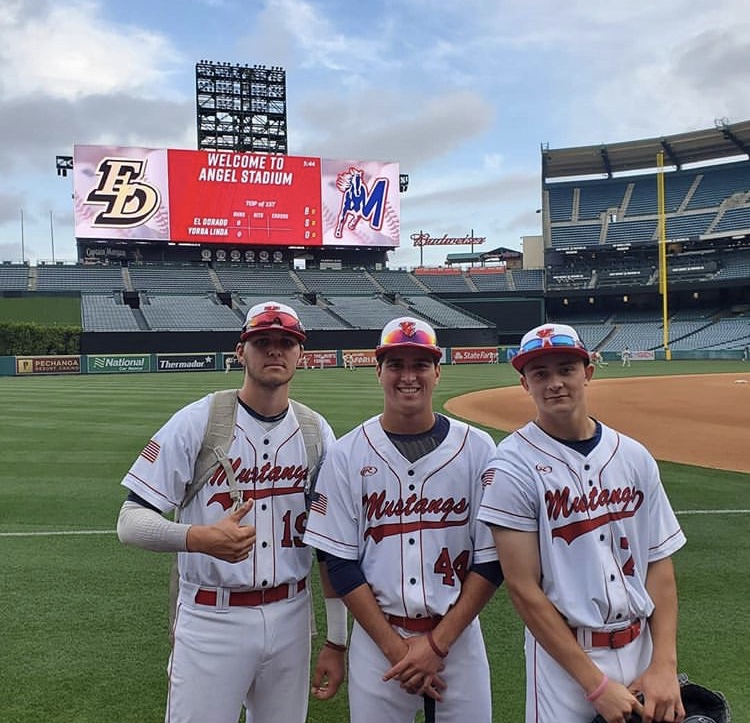 Players from the baseball team pose proudly in front of the "Welcome to the Angel Stadium" sign.

Tuesday, March 19, YLHS hosted El Dorado at the Anaheim Angel Stadium for a Century Conference game. YLHS and El Dorado students gathered at the stadium at 7 p.m. to watch Sam Mueller (12) throw the first pitch. Mueller received a standing ovation as the proud fans cheered. This was a very special moment for the YLHS baseball program because of Mueller’s recent eye injury that has stopped him from being able to finish out the season with his teammates, although he is definitely out there on the field in spirit and for support. We are hoping for a smooth recovery for Mueller!

For another proud moment for YLHS, our own Nadine Kashou (9) performed the National Anthem before the baseball game. Kashou is only a freshman and is said to have done one of the best performances by a high school student.

As for the game, YLHS came out victorious by a score of 3-0. A great bounce-back effort was performed on the mound by our pitchers. The Mustangs sent six pitchers to the mound, giving up only two hits in seven innings. Bryce Vogel (12) got the win by pitching two innings and striking out three hitters and Ben Miller (12) got the save . The offense was led by Blake Wink (12) who had three hits, one of which was a double. RJ Vanderhook (12) got the Mustangs on the board early with an RBI. Dylan Strong (12) had one RBI as well. Way to go Mustangs, we are proud of the win!

This game was specifically special for our baseball team because of the opportunity they received to play at the Anaheim Angel Stadium. The chance to play on the professional field is almost a lottery as every year a few teams are chosen by the Angel Stadium Organization to play. Once chosen, the baseball team had to sell $10,500 worth of Angel’s ticket vouchers at $25 a ticket to pay for the event. If the team does not raise enough money, they are not able to play.

This is the second year our baseball team got the chance to play at the Anaheim Angel Stadium, as well as our second consecutive year defeating El Dorado. “It is a dream for our high school athletes to play on a professional field” Coach Robinson (Staff) shares, “so playing at the Angel Stadium is a very special opportunity for the players.”

This is Cole Robinson’s (12) second year playing at the stadium; he adds that “growing up attending Angel’s games at the Angel Stadium, it was always a dream of mine to play on a professional field, but a dream I never thought I would accomplish unless I ever made it to the Major Leagues. So for me, playing on a Major League field was a memorable experience for sure, one that not many athletes get to experience.”

Our baseball team still has a long season to finish so we are wishing them good luck for their upcoming games in hopes that the team makes it to CIF this year! Go Mustangs!