All about Trader Joe’s, Your Local Neighborhood Store 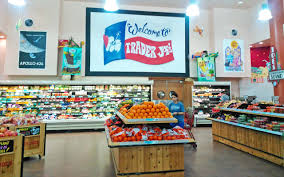 Inside a Trader Joe’s store.

Opening in the 1950’s, in exact 1958, Trader Joe’s started out as a small chain of convenience stores. In fact, Trader Joe’s isn’t even the original name; Pronto Market is. The name was changed in 1967 when a new founder took over the business. Pasadena, California is where the first official store is located and remains open to this day. The specialty of the store then was to find all types of wine in California. Then stores were upgraded to become bigger and have a Hawaiian theme. The store was filled with cedar planks, and crew members started wearing hawaiian shirts as uniforms. It was meant to give the store a fun, comforting, and laid-back vibe to it, where customers felt as if they were with their own families. The store also started making its own food products that were hard to get. Costs were put to the right amount so that customers could buy quality foods at an affordable price to save money.

In the 1970s, the store’s newsletter, “The Insider Report” as well as the store’s first private label grocery product was introduced. They came up with the communication bell system you most likely have heard in the store before, and they started using their infamous reusable bags. The next decade, the 1980s, Trader Joe’s was mentioned in a national magazine, and they started recording their own radio store ads where behind-the-scenes facts were told. Also, the store’s newsletter was changed from “The Insider Report” to “Fearless Flyer” which still remains the name today. The stores also started opening outside of Southern California; a store in San Rafael, Northern California opened.

The 1990s was a big year for Trader Joe’s. Their mission statement was created, handles were added to the bags, stores in Arizona, Oregon, Washington, and Nevada started opening up. Additionally, their website went live. As the 2000s came around, Trader Joe’s opened additional stores for the first time in the midwest, in Illinois to be exact, as well as in New York, Georgia, and North Carolina. Price scanners were also installed for a quicker checkout process and Trader Joe’s made a commitment to eliminate artificial trans fats, artificial flavors, artificial preservatives and GMO ingredients from all their private label products. This decade, the 2010s, Trader Joe’s opened even more stores in Nebraska, Iowa, Maine, Missouri, Kansas, Texas, Kentucky, Florida, Utah, Louisiana, Idaho, Colorado, Alabama, Oklahoma, and Tennessee. The company also launched an app and celebrated their 50th year anniversary.

Throughout the years, Trader Joe’s has truly focused on interacting with the community. For example, they give many donations of their products for student groups, churches, and other organizations. One of the special education aids at YLHS, Ms. Deena White, has been working there herself since 2014. Before Trader Joe’s, she worked in tech sales at Corporate America. Eventually, she felt the need to change and venture out to new things. After hearing about the amazing reputation Trader Joe’s has, she decided to work there. Ever since she started, she has loved it. Ms. White feels that everyday there is different in its own way. What brings her joy the most is seeing little children with their families filled with joy and excitement when they get to roll around their own little carts and end the trip with a lollipop and stickers; something so simple, yet so cute. One thing she loves most is the bond everyone has with each other; they’re like a family. So many regulars have become friends with the Trader Joe’s crew for coming so often and feeling such a loving and welcoming environment. Although it is sometimes challenging for Ms. White to manage both jobs, it is worth it at the end of the day because she is doing two things she really enjoys.

After mentioning how great the store is, freshman, Adnan Jijakli (9) expressed how he loved to go there with his mom to get groceries and “[he] remembers going there ever since [he] could remember as a little kid.” Clearly, Trader Joe’s is an amazing place. With now more than 400 stores, Trader Joe’s has massively grown starting as a single store, and then bringing amazing products made with love to local neighborhoods all around the United States of America.