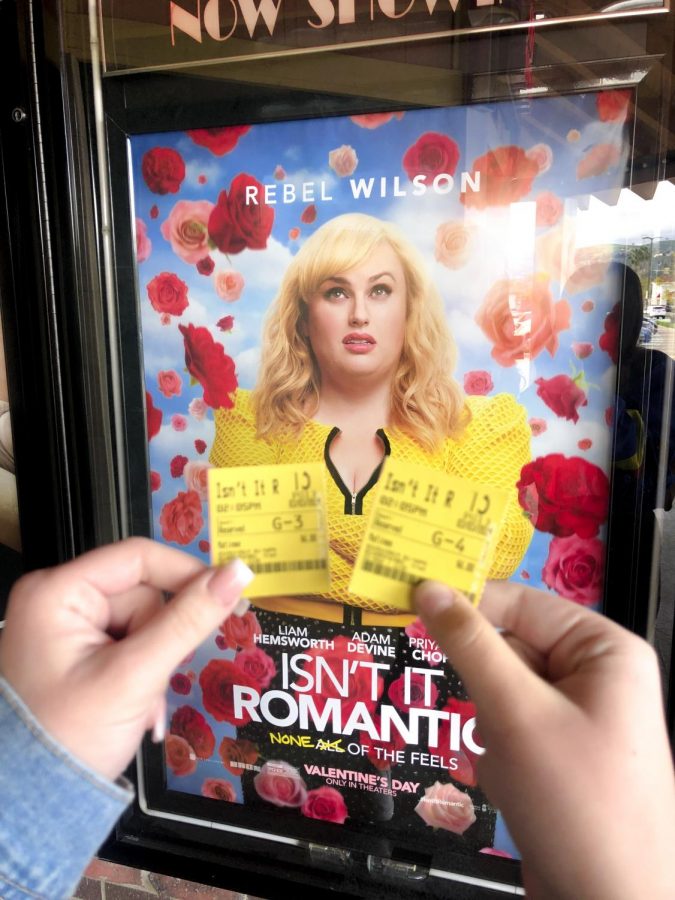 Isn’t it Romantic, starring Rebel Wilson, Liam Hemsworth, Priyanka Chopra, and Adam DeVine, is a romantic comedy in which the main character Natalie (played by Rebel Wilson) is a New York architect itching to be recognized for her talent, but has trouble getting her foot in the door due to what she feels like is because of her less-than-appealing outer appearance. Her character is introduced as one who has a more pessimistic and downbeat perspective of the world. Towards the start of the film, she comes to the conclusion that she is not going to let her life revolve around love.

Natalie’s world rapidly shifts as she gets knocked down in a New York subway by a mugger, and then consequently wakes up in an alternate world that seems to be stuck in some sort of dream-state. Through a series of cheesy montages and tacky elevator music, Natalie’s world is flipped upside down as it is discovered that she is the new head architect in her office, and everyone is just dying to get a second look at her

After soon realizing that she’s the main star of a romantic comedy that is unfolding in real life, Natalie’s only chance of returning to the world she once knew is to complete the story by succumbing to the one thing she was always the most cynical and negative about in life: love.

To say that this movie is merely cheesy is truly the utmost of an understatement; however it does shine light on the stereotypes and over-done aspects of normal romantic comedies. For instance, the film often pokes fun at the overused “gay best friend” that always helps the protagonist in her quest to steal the heart of her soulmate. Danielle Donahue (11), shares similar thoughts by saying, “I like how it was different from other traditional romantic comedies since it was, ironically, a romantic comedy making fun of romantic comedies.”

Additionally, Rebel Wilson’s character almost served as the symbol behind every single reason there is to dislike romantic comedies. Including her humor in wit in all the places that’ll have you rolling on the floor with laughter, she exposes all romantic comedies for having the same gay best friend, two rival work partners who are eager to trample one another in hopes of climbing the corporate ladder, and the over exaggerated scene towards the end where the protagonists dramatically “stops the wedding” in order to confess their true love.

Like the main character Natalie, I don’t normally enjoy romantic comedies due to their tacky characters and predictable love plots- but Rebel Wilson’s character made the movie too good to hate. Her and her co star Adam DeVine, who plays Josh, during the two times in the film that they break out in dance and song, it was almost like a chance to finally let out a breath. What I had been holding my breath in for; I’m not sure what- but the movie has a way of almost locking your eyes onto the screen for the entirety of the duration of the film.

In terms of romance, the film perfectly nails almost every cliche you can imagine. And even though you’re watching all the stereotypical romantic comedy eyesores unfold before your eyes, there’s a level of appreciation that comes out of it. The movie doesn’t overdo the mocking to the point where it’s unenjoyable, it simply pokes fun at the reoccurring cliches that many people fail to notice while watching films like these.

Speaking for comedy, Isn’t it Romantic has jokes thrown in throughout the movie for almost every age demographic, making the movie both humorable for 9 year olds and 40 year olds alike.

Isn’t it Romantic is a film that is undoubtedly the film you should put on your watch list for the month of March. If you need a destresser and just an excuse to have a good laugh, Rebel Wilson will certainly take care of that for you.