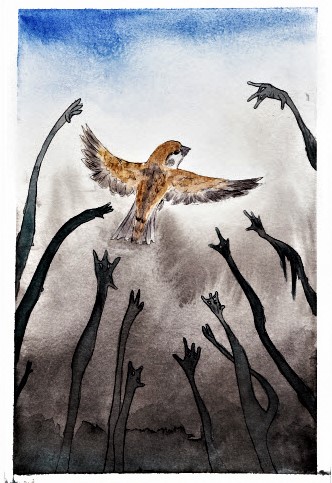 The bird represents an individual's voice being silenced.

My language arts class is currently discussing the environment and analyzing the way in which we, as a society, should be handling it. Some students shared a few polarizing views on the issue which prompted a mild level of contention amongst students. While the disagreement about the environment was benign, the conversation quickly developed into a full blown debate regarding topics related to ethics, religion, science, politics, and more.

Disagreement was evident, but one classmate in particular expressed some strong assertions that a number of students deemed offensive and ignorant. Words such as “triggered,” “insulting,” “bigotry,” and more poured from the mouths of students. Because of the offensive implications made in her remarks, a few teens, such as Jacob Viveros (11),  began to challenge the appropriateness of her comments and asserted feelings about her commentary being “unacceptable.”

It is understandable why students have reservations about the classmate being permitted to inseminate her beliefs on campus. Many felt attacked by her views and saw them as being hateful and ignorant. Preventing her from continuing to share her opinions would seem to be a way of creating the safe educational atmosphere that students feel they are entitled to. But objection to her speech is not a simple solution as it introduces some much larger issues.

Modern society has been universally dealing with controversy over the balance between tolerance and first amendment rights. In our constitution, we recognize our rights as citizens of the US. The first amendment stipulates several of these rights, among which is man’s entitlement to freedom of speech. The US government legally verifies the right to say as one pleases, thus the fight for sensitivity is proving to be a complicated web of ethics and politics.

Schools in particular are being forced to carefully consider rules and regulations about what is allowed to be said and the extent to which sensitivity must be accounted for. Disagreement has extended beyond traditional debates over liberal versus conservative, and a dialogue has begun regarding a person’s right to express their opinions, regardless of how radical it may seem. Some place a higher emphasis on protecting the comfort of individuals while others stress and defend a person’s right to speak their beliefs.

An intense game of tug-of-war between sensitivity and freedom of speech has begun. Maintaining one means violating the other. The dilemma of the way in which to handle the insemination of controversial comments on campuses has become increasingly prevalent in modern society. The struggle has taken the forefront as one of the most difficult problems to navigate, especially in educational environments. The issue poses one of the most prominent questions up for debate. Should we ensure one student’s feelings of safety and comfort by forsaking another’s constitutional rights?

The first amendment is only one of the many challenges that pose problems for the “tolerance” movement. Given the growing emphasis of sensitivity in modern culture and the complexity of its issues, the newest social movement requires some further analysis and investigation into its intricacies, implications, and validity.