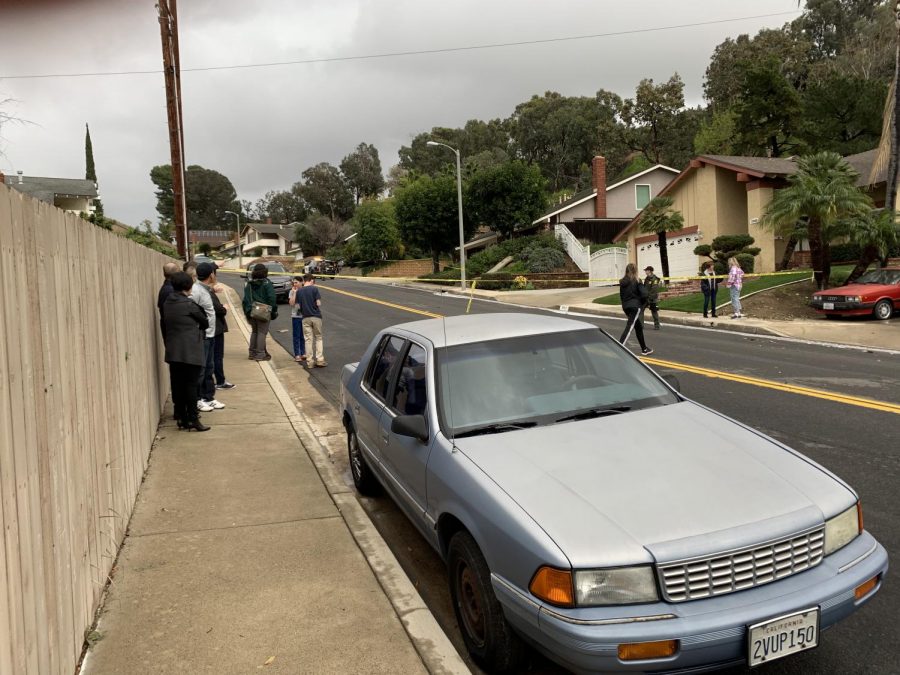 The neighborhood had been sectioned off to prevent residents getting too close to the scene. Many onlookers remained just outside the caution tape to try to see as much as they could. The individuals present in the photo are only a small portion of the neighbors who were watching from the street. In the sky, a large gray cloud of smoke can be seen.

On February 3, Sunday afternoon, a small plane crashed in Yorba Linda, setting one of the suburban homes ablaze. While it recently was believe that only two were killed and two injured, it has been released that five people in total were actually killed. It is reported that only the pilot was aboard the plane, but it is unknown exactly who was injured.

The plane had departed from the Fullerton Municipal Airport at 1:35PM and crashed on Canyon Drive shortly after. One two story house was engulfed in flames and at around 1:45PM the Orange County Fire Department received a call about the crash. Debris from the aircraft was found dispersed across the neighborhood’s streets.

The area was in chaos with neighbors jolted by the sound of the crash. Many had taken photos and videos of the scene in disbelief by what they saw. Within only a few hours, Twitter and Facebook was blowing up with videos and photos of the destroyed home. Many Yorba Linda students had seen the videos and photos of the crash pop up in their feed and many, such as Jayden Hawley (11), were “very surprised that it happened in our city. Things like that don’t typically happen here.”

By late afternoon, the police department had blocked off the majority of the neighborhood, but the streets remained filled with neighbors and other Yorba Linda residents trying to get a glimpse of what had happened. One of the many onlookers described the sounds he had heard and what he saw. As he had rushed out of his home immediately following the crash, he watched as parts of the engine flew into different areas of the neighborhood. Others had heard the sound of the plane coming and sensed something was wrong. According to the Los Angeles Times, one resident, Nancy Mehl, had immediately taken cover and described how “it felt like a bomb went off through the front of the house.”

Immediately following the crash, residents were in panic, sprinting towards the home to see what had happened. The neighborhood’s focus had completely shifted from the upcoming game on their screens to the chaos outside.

Many neighbors were preparing for their Super Bowl parties and celebrations when the crash occurred. Several onlookers were only half-dressed as they were in the midst of getting ready when they heard the plane crash and saw the enormous black smoke that filled the area. A number of homeowners also cancelled their parties in light of what happened.

It was evident at the scene how shaken the neighborhood was. There was a mixture of panic and curiosity and neighbors who had never spoken before were discussing what they had seen and heard. Families, individuals, teens, and more stood outside, shocked by what they saw. The air was plagued with the intense smell of smoke and one would never have seen so many residents standing outside and walking through the streets.

While it has now been revealed how many were injured and killed, in the first few hours following the crash, it was clear by the light-hearted conversations overheard that no one knew quite how serious it was. Some spoke about the trouble their guests would have getting into the neighborhood for parties, unaware of how destructive the crash was. One neighbor was heard asking a police officer if the streets would be reopened soon.

The home is heavily damaged and the fire department plans to continue their investigations of the house for a few more days and to do so, nearby school, Glenknoll Elementary School, will be closed Monday. It is unclear exactly what caused the crash and how officials and residents will proceed in the coming days, but it is evident that Yorba Linda has been shaken by the tragic event.