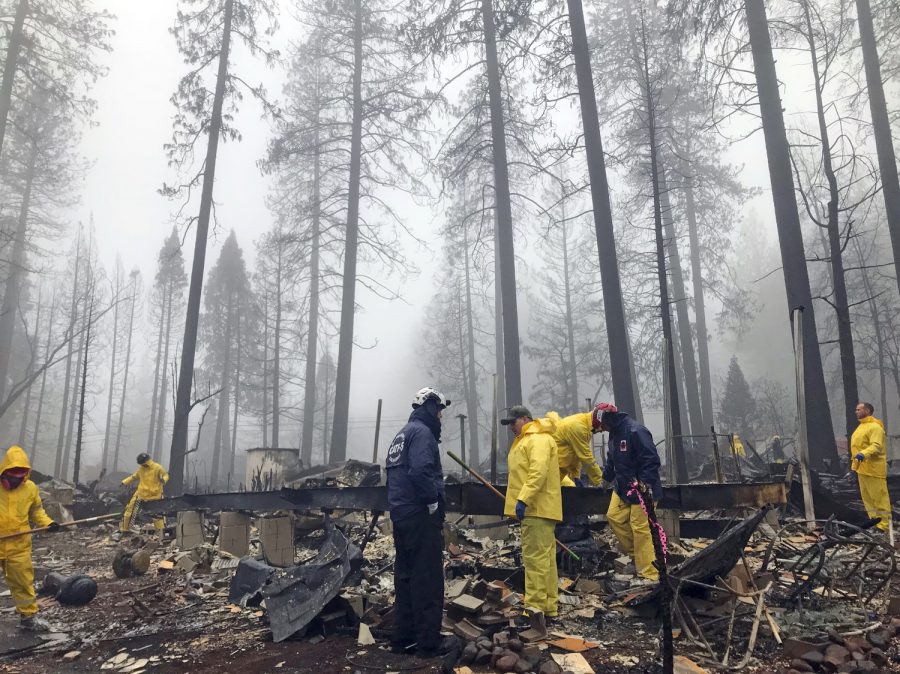 Volunteers help firefighters after the wildfire in Paradise, CA.

Climate change has been a heated debate throughout recent years, especially with the current political situation. Recently, the 2018 U.S. Climate Assessment contributed to this; it predicted dire consequences from the current environmental situation and policies.

The report is released every four years, and 13 different federal agencies worked to put it together (The New York Times). Compared with the past report of 2014, there have been a number of changes- notably predictions that have become reality. The official summary of the 1,656-page report is split into 12 sections, each of which has an impact on some aspect of human society.

This section covers how climate change has and will continue to impact communities, especially in terms of “infrastructure, ecosystems, and social systems.” It points out that those who are already disadvantaged and “vulnerable” are more likely to suffer from the consequences of the damage, which is why there should be a focus on “prioritizing adaptation actions” for these groups to “contribute to a more equitable future.”

In terms of the economy, the report warns that there will be serious consequences on the economy if the global community fails to take serious action to adapt to and reduce climate change. Everything from agriculture to electricity will be affected, and “annual losses in some economic sectors are projected to reach hundreds of billions of dollars by the end of the century.”

Because of climate change, other systems and sections that are already weakened are going to be more susceptible to “risks or failures.” Furthermore, the extreme weather conditions that accompany climate change can also cause damage to resources, transportation, health, etc. It is important that all of these interconnected impacts are adequately assessed and managed.

There are a number of actions that can, and should be taken to reduce the harms of climate change, especially “more immediate and substantial global greenhouse gas emissions reductions” and “regional adaptation efforts.”

Climate change is causing much fluctuation in terms of water, causing both more severe droughts, heavier rainfall, etc. This is raising concerns and issues, as some states and regions are struggling with “mismatches between water availability and needs,” which affects not just water supply but also hydropower.

Both temperature and precipitation are causing more health risks, including “exposure to waterborne and foodborne diseases,” “heat-related deaths,” allergies, animal-borne diseases, and more. Both “adaptation and mitigation policies and programs” are necessary to “prepare for the risks of a changing climate.”

Because many Indigenous peoples depend on natural resources, they are expected to be “uniquely affected by climate change.” Some of the possible ways the harm can be reduced are through “community relocation” and “mitigation actions” to develop renewable resources on their lands.

Climate change, especially the increase in wildfires, will reduce the “many benefits provided by ecosystems and the environment.” In order to prevent and reduce damage, certain strategies such as “prescribed burning to reduce fuel for wildfire, creation of safe havens for important species, and control of invasive species” should and are being implemented.

Crops are expected to have decreased yields due to the many possible harms climate change will have on agriculture. Livestock is expected to suffer from “heat stress” due to “extreme heat conditions.” Overall, this impact on agriculture will also affect the distribution, pricing, and availability of food and the economy.

Climate change will also have an effect on both energy and transportation, “threatening more frequent and longer-lasting power outages, fuel shortages, and service disruptions.” Better planning and improvements must be made to “reduce exposure and vulnerability.”

The threats posed to the oceans and coasts are many, some of the most dangerous being “rising water temperatures” and “retreating Arctic sea ice.” These threats, along with others, will negatively impact everything from “ocean and marine species” to “communities that rely on marine ecosystems.” In order to prevent some of the most serious consequences, action should be taken to “adapt to more frequent, widespread, and severe coastal flooding.”

Overall, it is evident that climate change is a serious issue, one that affects an extensive number of sectors of human society. Ultimately, everyone will feel the harms of climate change, so it is crucial that the government, companies, and individuals all work to follow the guidelines established by the report to reduce and prepare for climate change. Alice Ding (11) notes that “the wildfires we have had recently are just one example of how real and serious of an issue this is.” Certainly, she is correct, as the visible effects will only become even more prominent as climate change progresses.