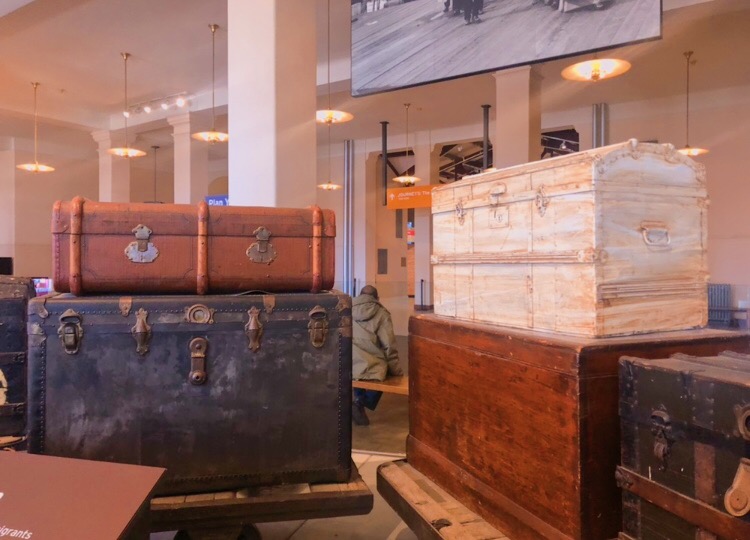 Original luggage from immigrants on Ellis Island from various locations around the world.

Ellis Island. What exactly is Ellis Island? Situated next to Liberty Island in New York, Ellis Island actually happens to be of substantial importance to the ancestry of countless Americans, as it is estimated that 40% of Americans have genealogy traced back to Ellis Island.

From 1892 up until 1954, Ellis Island served as the main immigration station situated on the east coast that granted numerous foreigners access to life in the United States. A welcoming point and a symbol of hope for many, Ellis Island is a crucial part of American history that deserves to be spotlighted.

When the YLHS newspaper and yearbook classes took a trip to New York in early November, the students took a trip to Ellis Island in which they had free time to roam around the island and explore its rich history. Malieka Khan (11) was one of the these students, who walked around the museum at my side. She describes her experience on the island explaining, “it was an impactful experience to feel where those people with such hope had once walked before, because you could still feel the culture and history that was created there.” What should be held with great importance to many Americans is sadly underrated and for the most part, and an unknown part of their lineage.

Ellis Island is a landmark of rich history that, in light of current events regarding immigration and lands of origin, have aspects to it that deserved to be touched upon.

Among all the immigrants flowing past the gates of the island, a large percentage of those crossing over were those of Jewish descent. Many of these Jewish people were fleeing from political and economic oppression in Russia and in other regions of Eastern Europe. Among those who weren’t Jewish, also had similar reasons for settling in America. In a broad sense, these reasons relate to religious, political, and economic asylum that they seeked to obtain in the United States (History Channel).

One of the known attributes to Ellis Island is the fact that during many cases, an individual hoping to emigrate over into the United States could possibly be denied access if their physical and mental health were not in perfect shape. It was allegedly said that a doctor could analyze a person’s health just by a mere glance, and right there on the spot dictate whether they were worthy or not of immigration (Liberty Ellis Foundation).

Despite its nickname to some as the “Island of Tears,” only two percent of people who ever laid foot upon the soil were denied entry. During the island’s early years, however, laws such as the Chinese Exclusion Act and the Alien Contract Labor Law inevitably created hardships for hopeful immigrants (mainly targeted ethnic groups, for that matter).

During the early years of the twentieth century, seen to most as the peak of the island’s operation, were experiencing 7,000-10,000 people passing through the immigration station every day. Each individual took about three to seven hours to process, and I’ll let you figure out how long and strenuous each day was for those working the operation.

The main countries from which Ellis Island experienced immigration from are as listed (not in any particular order): Germany, Russia, Italy, Ireland, Austria-Hungary, England, Poland, France, Greece, and Spain.

And as said in the video, the tears of joy, the sweat of anticipation, and the blood of countless hardworking individuals lingered in the atmosphere 100 years ago, as it continues to do so today, and as it will continue to do so in the next 100 years.

Also, if you’d like to trace your possible ancestors through the 65 million Ellis Island records, the link to the website is posted here.