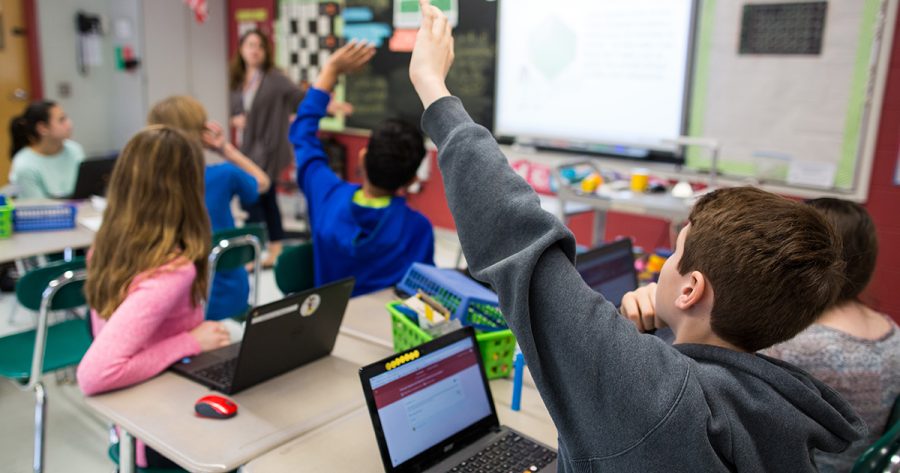 Students raise their hands during a class discussion. Photo credits to Google For Education.

South Korea – Unlike other countries, South Korea has a very rigorous education system that consists of long studying hours and rigorous competition. After attending normal school hours at around  7 a.m to 3 p.m, most South Korean students are expected to take multiple outside classes in private tutoring sessions. Not to mention, during school, students are taught everything from English to college level mathematics. In fact, some children start studying for South Korea’s college entrance exam, CSAT, during primary school.This obsession with higher learning is probably born from a society that focuses on South Korea’s top universities: Seoul University, Yonsei University, and Ewha Womans University. Getting into one of these schools, solidifies one’s ability to be successful in society. Yet, it should be noted that despite the unhealthy push in South Korea’s education system, according to WorldTop20, South Korea is part of the top three best best education system as of 2015.  Unlike the United States, ABC News reported that 93% of all students in South Korea graduate high school. With that in mind, the abundance of a highly educated youth shapes South Korea into one of the most advanced country in the world.

Finland – For several years, Finland has also been ranked on the WorldTop20 list. However, the education systems between South Korea and Finland are drastically different.  As a matter of fact, in Finland there are no standardized testings, no private schools, and less homework. Instead of promoting an environment of stress, Finland has revolutionized their education system to only consist of holistic practices. For an example, schools, students, and teachers aren’t ranked. In this way, Finland’s education system promote cooperation rather than competition among its youth. The main difference between Finland and the rest of the world, regarding education, is the stress free environment that students are taught in. All students receive free school meals, has a relatively easy access to health care, and gain individualized counseling in fields of mental health. To add to the list of benefits, schools in Finland start at a later time and at a older age. In the United States, classes start anywhere between six to eight in the morning. Finland, on the other hand, start classes at around nine  in the morning. Based on Big Think, most finns begin their school education at the age of nine. In contrast, most students begin school at age five.

Although only South Korea and Finland were mentioned in this article, there are other school systems throughout the world that have different ways of teaching the youth.