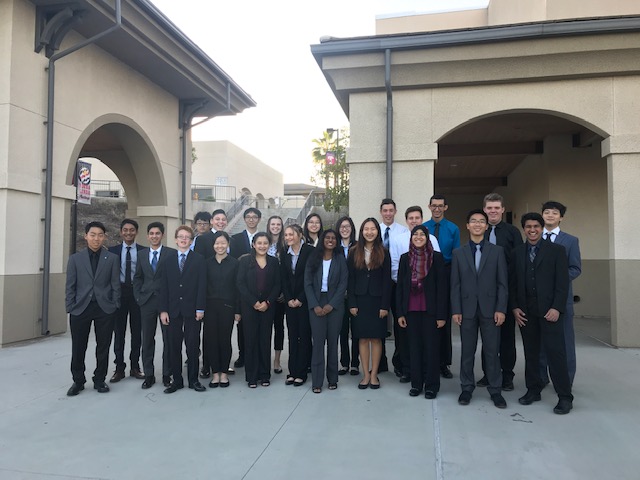 The YLHS members before heading to LDI.

On October 27, students from YLHS’s chapter of Future Business Leaders of America (FBLA) attended the annual Leadership Development Institute for the Southern Section of California at DoubleTree by Hilton in Anaheim. They joined a number of students from across Southern California for informational and engaging workshops, practice tests, networking, and so much more.

The day began by giving attendees the option to go to any of the different workshops offered in ballrooms in the hotel. Notably, some of the workshops were led by YLHS students who are on the Southern Section board. These students included Sarah Chen (11), Amanda Walion (12), and Emily Remer (12).

Sarah’s workshop, called Passion Projects, discussed the importance of finding a passion project for oneself. During her workshop, students were given the chance to take a personality test that sorted them into four different types of personalities: sanguine, choleric, melancholic, and phlegmatic. Then, they were divided into groups with people of the same personality, and together they brainstormed ideas and made a poster for their very own passion project.

Meanwhile, Amanda’s workshop was about the benefits of networking and how to become more effective at creating lasting connections. The majority of her workshop involved the attendees talking to each other, asking questions and adding each other on social media. Through this experience, they were able to practice the new techniques and basics that she taught.

Finally, Emily’s workshop was introduced attendees to the basics of FBLA. It included a presentation that covered facts and history. Then, they were able to test their newly acquired knowledge through a fun game, the winners of which won candy.

Over the course of the day, students were able to choose between many different unique workshops. In between, they enjoyed the opening session, which introduced board members and a guest speaker. One of the attendees, Amelie Tran (11), said that the most memorable part of LDI was “the guest speaker, who talked about how the journey to success is the most important part.”

At the end of the day was a more casual way for the members to network: the social. This included music, basketball, and a dance with music. Changing into Halloween costumes or casual attire, the members were able to relax and get to know other motivated individuals.

The next day included a testing session during which both new and returning members of FBLA were able to take practice tests in regard to the competitive events of FBLA. Topics included everything from Accounting to Insurance and Risk Management, and the event allowed the members to determine what event they may be interested in competing in. Finally, the second day ended with the closing session, marking the end of another successful LDI. Overall, LDI was a wonderful event, offering a wide variety of experiences including networking and learning.