The Antidote is the Vote 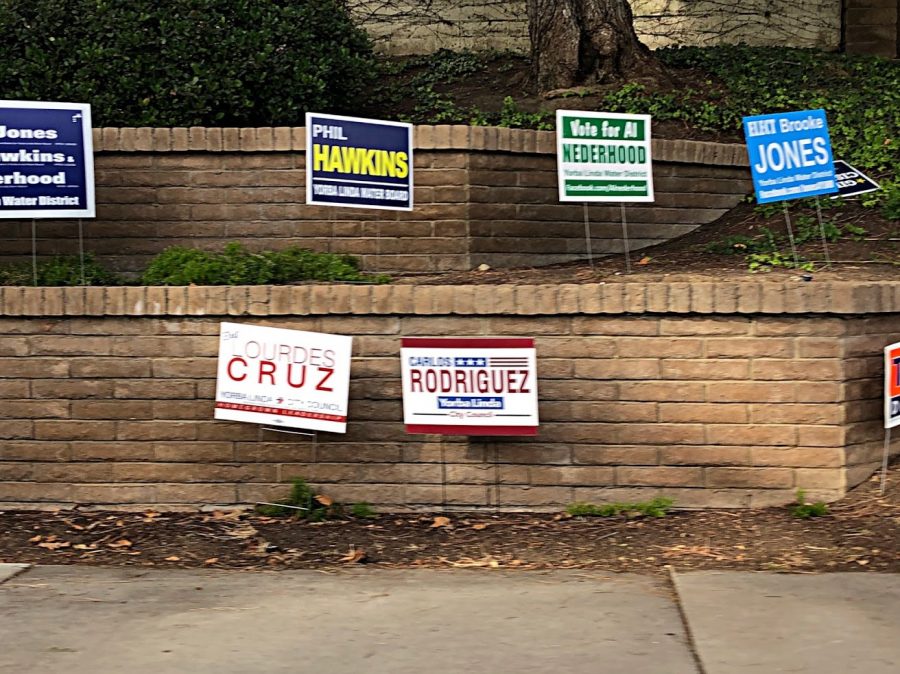 Candidates post their campaigns all around Yorba Linda in preparation for Election Day.

The campaign posters lining the streets and political advertisements broadcasted over television programs, social media, and streaming services seem endless and overwhelming. These campaign efforts, however, will soon disappear after Tuesday, November 6, when millions will flock to their local polls to change the future of their local communities and state in this year’s midterm election. While it may be easy to be confused about the numerous propositions and candidates on the ballot, there is no excuse not to vote this Tuesday.

Election Day occurs every year on the first Tuesday of November. 2018 marks the midterm elections, which take place in the middle of Donald Trump’s presidential term; all seats in the House of Representatives as well as a third of the seats in Senate are open. Locally, positions such as governor, mayor, city council, sheriff, and school district board are open. Citizens can also vote for or against multiple propositions according to their state.

Among the numerous local campaigns, the biggest campaign of all has been urging citizens to register to vote. Widespread promotions on social media and online have made voter registration as quick and easy as possible. The campaign was ultimately effective; on National Voter Registration Day, a record 800,000+ people registered to vote, making 2018 the highest voter-registered midterm elections in history, according to Time.

In California, 12 major propositions will appear on the ballot in addition to candidates running for governor and for the Senate. Local elections in Yorba Linda include positions on the city council, water district, and PYLUSD school district. Candidates for city council include Lourdes Cruz, Carlos Rodriguez, and Peggy Huang. There are also 22 local ballot measures for Orange County, which call for legislations such as raising the minimum wage and limiting city council terms.

As a voter, becoming aware of local topics and making decisions between candidates can be a lengthy process. As a candidate, the campaign process is even more complicated. Carlos Rodriguez, a candidate for Yorba Linda City Council, gives some insight on the behind-the-scenes of running for office:

C: What drove you to seek the position of a councilman for Yorba Linda?

R: I’m the father of two young children: my son, Ryan, is eight, and my daughter, Rebecca, is six. I currently serve on the Parks and Recreation commision, and we’ve opened three new parks during my time as a commissioner. I really want to do everything I can to help make sure our city remains on the right track. There was an opportunity to serve, and I believe it’s an honor to give back to your community, so I decided it would be a great opportunity to throw my hat in and run for city council to see what I can do to help continue to make our city the great place it is to live.

R: It’s really amazing. You get to meet so many new people that you wouldn’t otherwise [meet]. I spent the last two months going door-to-door across our city, meeting families and learning about some of the issues that they’re concerned about. I even one time was walking, and a gentleman said, “Hey! We’re having a block party right now. Why don’t you come on over?” The next thing I knew, I was at the block party, and they were saying, “Hey, we want Carlos to say a few words about how he wants to keep Yorba Linda on the right track.” So you never know what opportunities will present themselves when you go out there and you reach out, and I think it’s so important to be open, honest, and transparent and really make sure that you’re accessible…Call me corny, but I think being able to serve in public office is a privilege and it’s always wonderful to be able to help and give back.

C: As a candidate, what are your final thoughts on the campaign as Election Day approaches?

R: I think that it’s really important to make sure that everyone has a voice, and everyone should vote. That’s one way to make a difference…I think that it’s important that they should vote for someone with some great experience like me who can make sure that they can have opportunities to live and work in Yorba Linda for years to come and have a great quality of life that’s safe and has lots of places to go: restaurants and places like the movie theater that they can enjoy in our great city.

C: What are your thoughts about certain stigmas and stereotypes surrounding politicians?

R: I think we’re fortunate in Yorba Linda to have a really great city council that are respectful of one another and that are serving for the right reasons. They want to give back to the community…to me, it’s really about working together in harmony, and we can agree to disagree in a civil way, and I think that’s the current model of how this council conducts itself, and so I think we’re very fortunate to have a high standard of ethics and civility on our current city council…Unfortunately, there’s an environment, particularly in Washington D.C., that is toxic at times due to the lack of civility and mutual respect, and that is nothing like what we enjoy here in Yorba Linda, fortunately.

C: How long have you lived in Yorba Linda?

C: In your opinion, what are some of the best qualities of Yorba Linda?

R: I think that there’s a hometown feel. Even though we’re growing, we still have a great opportunities for our trails, and there’s the equestrian heritage that we have. There’s opportunities for open space, like parks, and we have those types of qualities that make it feel like a hometown. Yet we still have the best of both worlds in that we have a new cultural arts center, our library, and our town center, with the restaurants, and the new movie theater, so we get the blending of the best. Folks can have entertainment here indoors, they can go to parks, they can go on hikes, and I think that’s what makes Yorba Linda so special. There’s only 13 presidential libraries in the nation, and we have one of them, so there’s a wonderful opportunity for history to come alive, and we have great speakers who come there. I think there’s a good family feel, too. We have many families who have been here 20, 30 years, and we have a good blend of new families that have moved in recently in the last several years, and I think there’s a nice combination of that. You have great programs for Little Leagues and for soccer, baseball, and softball. I think, with all those things, it’s a family-friendly city, and we also have great programs for our seniors. We offer a full array, a spectrum of services, to our families and residents here, and that’s why I think it’s the best place to live, but then I’m biased, right?

C: Do you have any advice for high schoolers interested in politics?

R: The way I got started was as an intern, so my recommendation would be to volunteer, to get involved in the campaign. Folks can go down to our Main Street and walk in there and volunteer for Young Kim for Congress. There’s an opportunity to volunteer not only for me or for her, but even after the election, and I think that an internship is always a really positive way of getting some experience.

Thank you to Carlos Rodriguez for providing The Wrangler his perspective as a candidate! For more information about Mr. Rodriguez and his campaign, visit his website at www.rodriguez4yl.net or email him at [email protected].

Voting is one of the most fundamental civic duties in the United States. Any citizen 18 years and older should vote to change and support things they care about. Matthew Lee (12), who will be 18 in May, comments, “I’m not 18 yet, but when I am, the first thing I’ll do is vote. Being able to vote is monumentous and a big responsibility for someone still in high school. I’m excited.”