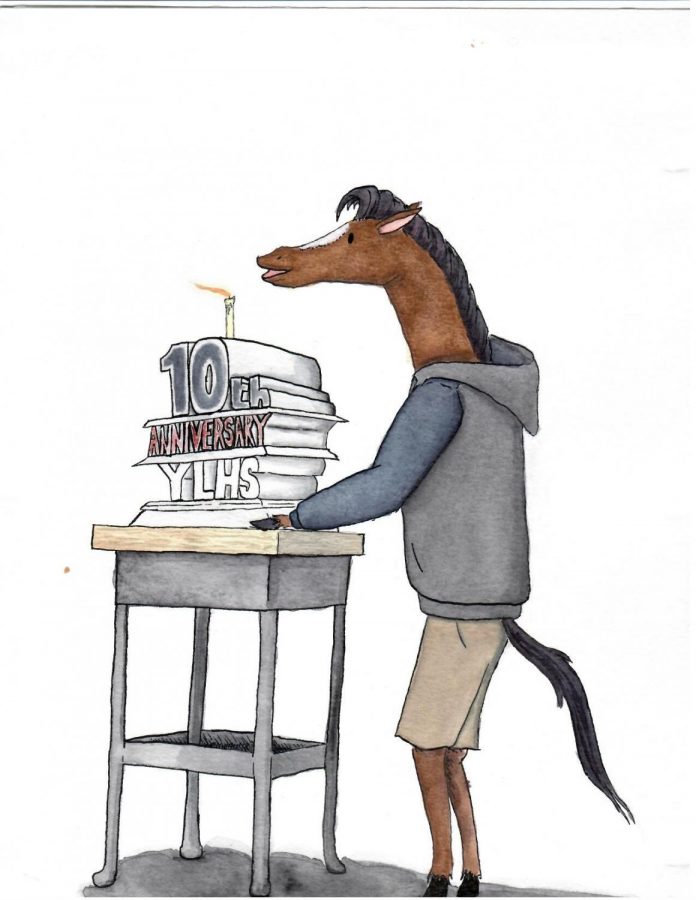 Mikey the Mustang celebrates by blowing out a candle.

YLHS celebrates its tenth anniversary as a school this 2018-19 school year since opening its doors Sept. 8, 2009. Campus life has changed quite dramatically since its first school year to current times. Although opening its doors with its campus still unfinished and under construction, YLHS was able to make a home for its students, receiving various accolades in sports and academics along its 10-year journey.

Just a decade old, YLHS is the youngest high school in the PYLUSD, but still considered a top-rated public school. The school opened in 2009, and only admitting freshmen and sophomores the first year (the graduating class of 2012 being the first students to receive diplomas from the school). This caused sports teams to mostly be Frosh/Soph and JV teams; varsity teams would form the following year, entering the Century League in 2010. Campus life was very different when YLHS first opened. Although construction for the school began in April of 2007, the campus itself was not entirely finished by the opening date in 2009 so most classes were held in portable classrooms. The school had a gym, but no bleachers, an office, but no library, and lunch for the students was held under a circle tent next to the gym. When walking through sections of the school that were still under construction, mainly the “horseshoe” building, teachers were required to wear hardhats and boots as a safety precaution. According to Principal Flynn (Staff), “YLHS was in bits and pieces upon opening. We had great teachers and classes but the facilities were not finished.” After winter break, the horseshoe building was finished when the students and teachers came back to school. Classes were then moved from the portables into this main building.

Students at YLHS are encouraged to “run with the STAMPEDE”. Stampede stands for service, teamwork, achievement, mastery, passion, ethics, dedication, and excellence. These shared values are what make students at YLHS mustangs. Since opening, YLHS has made many accomplishments as a school. In 2013 the school was recognized as a California Distinguished School, in 2015 YLHS was named both as a Gold Ribbon and Exemplary Arts program High school by the state of California, and in 2017 YLHS was recognized by US News and World Report as one of the top high schools in the nation. As for sports, the school won CIF in wrestling (2013) and in football (2016). YLHS is ranked at 168th within California as a public high school, offering 16 honors courses and 23 Advanced Placement courses for students (ylhs.org).

With many sports and clubs and a requirement of 40 community service hours to graduate, the students of YLHS are very involved in their school. Payton Janish (12) recounts that her favorite memory at YLHS was “winning against Esperanza in the football game and canned food drive last year.” Faith Webb (12) recalls sharing her favorite memory of “making it to quarter-finals of CIF with her volleyball team.” From intense sports games to school dances, students of YLHS are able to make and share lasting memories of their high school years.