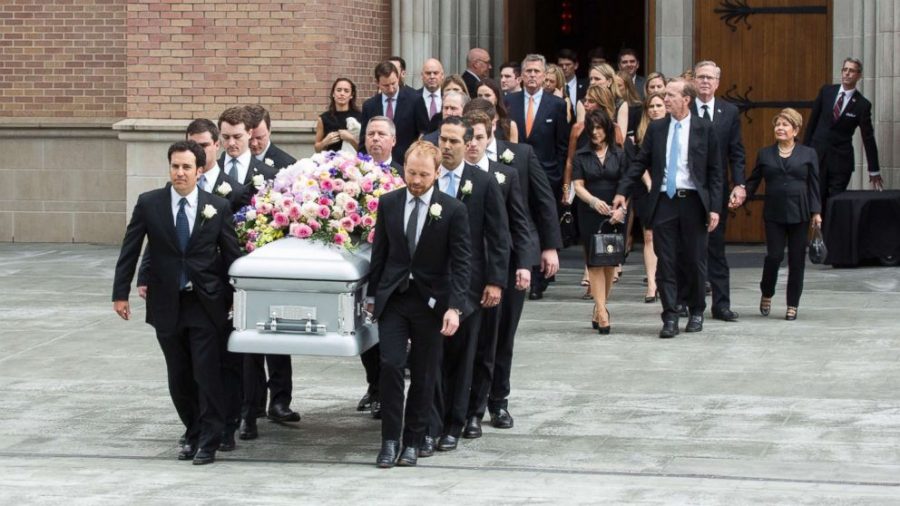 Friends and family say goodbye to Barbara at her funeral.

Barbara Bush, the former First Lady to George H.W. Bush, died on Tuesday, April 17 this year in her home in Houston, Texas. Her funeral was held four days later on the 21st in her home state of Texas.

Throughout the event, tears were shed for the woman that touched so many lives and left a huge impact on the nation with her departure. Barbara was very well-known for her kind and caring nature as a wife and a mother. She was also the second first lady to have both a husband and a son in the presidential office (the first being Abigail Adams).

A few of the attendees of the funeral include the Obamas, the Clintons, Melania Trump, Laura Bush, George H.W. Bush, and George W. Bush right behind his father pushing his wheelchair. While Melania attended, President Trump was nowhere to be seen, according to CNN. This is not surprising, considering that past presidents have been known to not attend the funerals of well-known figures as to avoid directing the attention to themselves as well as keeping the security of the event to a minimum.

Though H.W. Bush did not disclose the cause of her death, she was reported to have had chronic obstructive pulmonary disease and congestive heart failure, according to the Washington Post. Prior to her death, she apparently decided against seeking medical treatment for her conditions.

This, unfortunately, was not the first time H.W. Bush experienced a terrible family loss. Their daughter, Pauline Robinson “Robin” Bush, died at the age of three from leukemia, which was still a very new and not well-known word at the time, in 1953. The doctors could not do anything to save their daughter, so the only thing they could do was take her home and try to make her last moments peaceful.

“Her advice was to tell no one, go home, forget that Robin was sick, make her as comfortable as we could, love her — and let her gently slip away,” Bush had written in Barbara’s 1994 memoir. “She said this would happen very quickly.”

While both loses are indeed saddening, the tragedy does not end there. Only a day after Barbara’s funeral, H.W. Bush fell ill and was quickly hospitalized. According to a spokesman, Jim McGrath, he is responding well to treatment.

With recent events of his detrimental loss, this is hardly surprising due to his 73 year relationship with Barbara. It was a huge loss from his life, and people all over the country can’t help but wonder how he will continue to respond to this as time goes on.