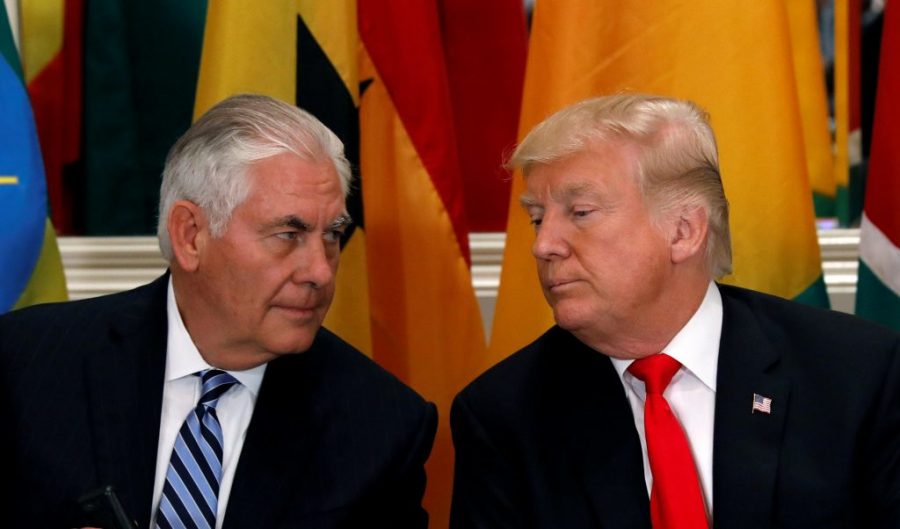 Tillerson and Trump conferring during a lunch conference.

Former Secretary of State, Rex Tillerson, was fired by President Trump on Monday, March 12. His replacement will be the former CIA director, Mike Pompeo. The announcement was made via Twitter on Trump’s account that morning.

After receiving the news, Tillerson gave a farewell statement on Tuesday, March 13. In it, he thanked the American people as well as the staff he worked with in the State Department. Though according to CNN, he did not give any thanks to the President.

Recently, Trump has been going on a “firing spree” on aids who have had opposing views to his. There were even rumors going around prior to the announcement. Even Chief of Staff, John Kelly told Tillerson that he “might see a Tweet” regarding his possession. So it was no surprise to many when Trump replaced him with Pompeo.

According to CNN, Trump’s reasoning for the firing was simple that he and Tillerson “were not really thinking the same.” Contrastly, with Pomoeo, they “have a similar thought process.” Their agreement on topics and issues will surely make any future meetings quicker and have more people on the same page.

The replacement was made just in time for a high-stakes sit down with North Korea’s Kim Jong Un. Making the decision so close to this meeting made many White House officials worry for Pompeo’s reliability in diplomacy. However, neither Trump nor Pompeo plan to go in unprepared. KTLA reported that Pompeo and Tillerson will have a two hour meeting regarding the information relevant to the meeting with a North Korea.

As for the timing, Trump believed that the transition was proceeding at the right time in regards to the upcoming talk with North Korea as well as any future trade negotiations.

Replacing Tillerson with Pompeo was anything but a last minute decision. Apparently, the plan has been in the works in the White House since last fall. CNN states that Trump has wanted to give the position to Pompeo for several months.

Though Pompeo is already facing some opposition from within his own party, both he and Trump are feeling optimistic about the proceedings of his position.