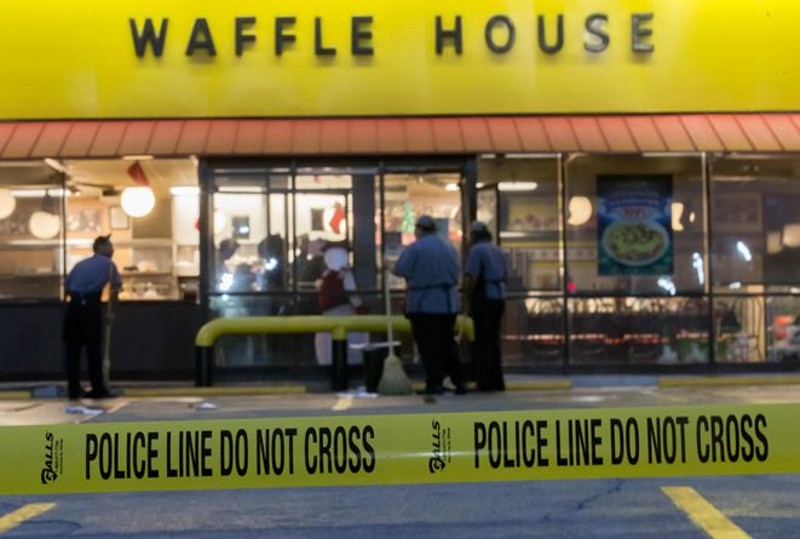 This is a picture of the Waffle House hours after the situation had taken place and the police had arrived.

A man by the name of Travis Jeffrey Reinking was taken into custody on April 23, after shooting down four people at a Waffle House in Nashville. The incident was said to have taken place that Sunday and was a miraculous story about how one man helped put a stop to the situation as quick as he could. The shooter was said to have been suspected of suspicious behavior with the cops following him soon after he stepped into the establishment.

Reinking, who is 29, was carrying a semiautomatic gun into the establishment where police had been following him prior due to an anonymous tip off they had received in advance. After he entered the restaurant and began to shoot, a man by the name of James Shaw Jr. took to action and disarmed the man as soon as he could. Shaw raced just in time for there to be four injuries, yet four deaths as well. On April 30, Shaw was honored for his service done that day at the crime scene with people stating that the casualties would have been much greater if he did not interfere when he had.

As of now, Reinking will be taken to the Nashville jail and be charged with four accounts of criminal homicides (nbcnews). Also, many racial accusations have been brought up since his outburst that Monday due to the fact that Travis is a white man who had killed, in his shooting, four people of color, three of which were black and one of which was Latino. This was also not the first time Reinking was arrested. He had a prior run in with the law when he was living in Illinois and he went to visit the White House. From that day his father was said to have taken his weapons away, however, later he admitted to giving his son his weapons back which led to this turn of events. “People owning weapons such as these can make it a lot easier for actions such as these to take place,” believes Roxane Fournier (10).

Reinking’s father will maybe face charges for giving the weapons back to his son as well as Reinking being held on a two million dollar bail. In the end many also see this issue as a chance to take political stand points where several people have spoke out saying how the weapons were the issue and his ability to use them. However, only time will tell who wins that debate and what direction the world will follow in thereafter.