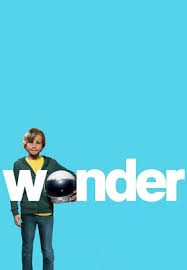 Wonder was a beautiful movie that touched the lives of many people.

Over the years, many classics have been transformed through the grasps of Hollywood’s writers and producers into modern films. From household favorites like To Kill a Mockingbird and Little Women, directors have come in and created a movie of their own interpretation on the same novel. In recent years, Wonder, a well-known novel that deeply inspires kids, was turned into a movie. It premiered on November 17 and has received an eight-five percent on Rotten Tomatoes.

The opening act of Wonder was pretty much identical to the original novel. It starts off with a voice over of August (Auggie) Pullman, played by the outstanding Jacob Tremblay, who is eleven years old. He explains that he suffers with Treacher Collins disease, and he has already had more than twenty surgeries before fifth grade. It is hard for him to be around other people because they stare, and kids are the worse because they pretend that they are not looking directly at him, even though they are. Within twenty minutes of the movie, he is attending a school where no one talks to him. As the movie progresses, viewers get to see how Auggie touches so many kids’ lives, changing them for the better. While he was born with a disease that makes it harder for him than for most people, he does not let that stop him. He does not let the bullies prevent him from being one of the smartest and most well-liked students on campus. By the end of the movie, he wins the Henry Ward Beecher Medal for being a person “whose quiet strength has carried up the most hearts.”

This movie kicks off from the start affecting the viewers, pulling at their heart strings. Right away the audience is able to experience and feel the hardships that Auggie has to go through. The movie is both a tear jerker and hysterically funny. You go from laughing to crying in minutes. It is evident that while Auggie has to deal with his disease from birth, he has a good outlook on life.

According to Riley Pietsch (9) who saw it opening week, the movie was heartbreaking. She was disappointed and sad to find that no one would sit or talk to Auggie throughout his whole day. She says that she “would have been the first person to befriend him.”

Not only is the movie great, but the makeup and costumes are superior. The makeup team does a marvelous job transforming Jacob Tremblay into August Pullman. They are even able to make Julia Roberts, Auggie’s mom, look as though she has not slept in years based on the fears that keep her up at night about her son.

This story touched many lives and transformed them for the better. From a boy that was too scared to show his face in public, to being the underdog that has a great ending, Wonder focuses on insecurities that everyone feels at times throughout their life. This film was a great mixture of laughter and sorrow which led to a great production, even better than the fabulous novel. Overall, this film will not disappoint!