From Comfort to Midair 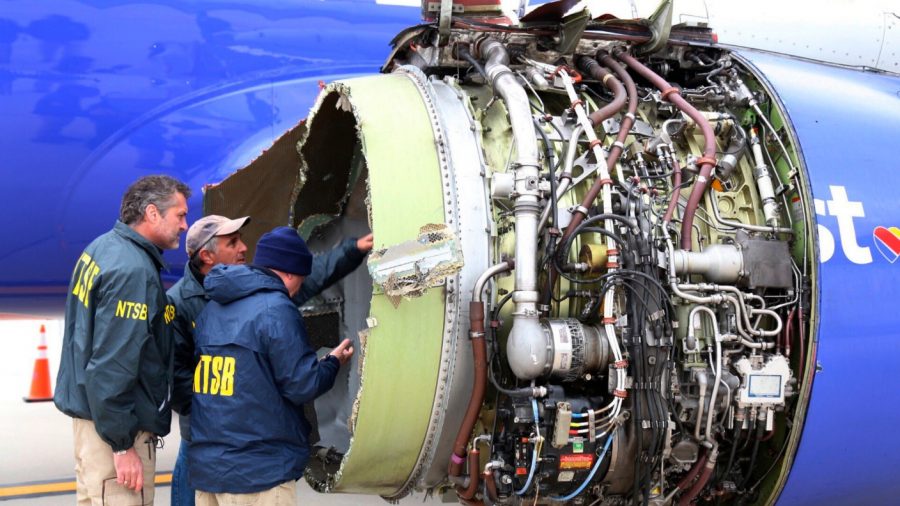 Below, the NTSB inspects the airplane engine after the emergency landing in Philadelphia. The busted engine was the main cause of Jennifer Riordan’s death.

A Dallas bound Southwest Flight turn a dramatic turn for the worse when part of its left engine exploded and half sucked a woman out of the aircraft. This routine flight turned deadly when passengers first realized one of the engines was missing a fan blade and it ultimately exploded opening the side of the aircraft, according to CNN.

Oxygen masks dropping down from the ceilings and passengers holding on to the woman who is half hanging out of the aircraft, the scene of this Southwest flight was one in which no aircraft has ever seen before. Sucked into a hole by the shattered window, passengers held on for as long as they could but she ultimately died in the aircraft, according to CNN. This event all started when a shattered piece of the left engine exploded and broke the above window. Leaving the hole vulnerable to the sky and people screaming out of desperation. Jennifer Riordan, the victim of this horrific incident was ultimately killed after being held for “many minutes outside of the flying aircraft” said Hollie Mackey, the passenger next to the victim on the plane.

Two men were ultimately able to get her back into her seat; however the damage had already been done. Cpr was tried but her body could not be brought back to life. She later was pronounced dead at a local hospital after an emergency landing in Philadelphia. According to CNN, the missing fan blade was the source of the engines explosion and the part in which ultimately broke the window in the first place. NTSB Chairman Robert Sumwalt said that “the missing fan blade was the main source of the accident and that it should have been caught” before takeoff.

With this accident not being the only one of 2018, that of airline safety is a big question that has been brought up in today’s society. Although sources say that flying is indeed the most safest form of transportation, these accidents don’t seem to vouch for that. Zac Hardison (11)

agrees that “flying is indeed safe and that [he] trusts in the fact that every minute on the plane is a safe one,” however with the recent accident upon this Southwest flight, the little hindrance of missing a fan  blade ultimately brought up a realization of what such a small minute detail can do.

Although Southwest soon after the incident released its condolences for the victim and her family, the death of Jennifer Riordan is more than just another airplane casualty. The blunt impact trauma to her head, neck and torso was said to be the main cause of death according to CNN. Hopefully this incident can be prevented in the future and airline safety can become a more sought out endeavour throughout that of the entire United States.