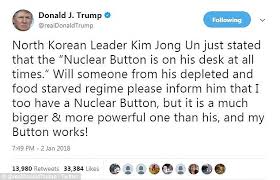 The relationship between the United States and North Korea has expectedly never been well. Naturally, a communist nation born in the ruins of warfare and established in military imposition will not bode well with a democracy such as the US. However, the objective has, at least for the US, has always been to dismantle the nuclear arsenal of North Korea through diplomatic means.

On his New Year’s address Kim Jong Un stated “The entire mainland of the US is within the range of our nuclear weapons and the nuclear button is always on the desk of my office. They should accurately be aware that this is not a threat but a reality.”

Obviously, the hegemonic United States cannot allow such threats without response. A direct challenge by the NK left unresponded could be equated to consent or acceptance. Obliged, Trump tweeted, “North Korean Leader Kim Jong Un just stated that the ‘Nuclear Button is on his desk at all times.’ Will someone from his depleted and food starved regime please inform him that I too have a Nuclear Button, but it is a much bigger & more powerful one than his, and my Button works!”

I applaud Trump for taking such an assertive stance and showing clear intolerance for the dictator’s squealing. However, being the President of such an esteemed nation, one could expect a certain professionalism.

Instead of holding a press conference or issuing a statement to the press, Trump took to twitter to tweet through a social media a statement that would in no conceivable way alleviate tensions. A statement iterating that the United States has more than adequate defense and firepower to respond militarily would have sufficed. However, Trump made the tweet personal. Evidently, Kim Jong Un is an unstable tyrant who rules in the absence of logic. To then quarrel with him in such pettiness is illogical. The leaders are flexing nuclear weapons capable of mutually assured destruction; is it really wise to compete in a one-upmanship where we test out our atomic ability?

Yet, it is not simply the dangers of this gratuitous stupidity that make his actions ill-considered, but rather the United States’ national prestige has been increasingly questionable in recent years and his tweet only furthered our downward trend. Our international policy has been condemned by the global community and Trump’s inauguration only exacerbated the issue. It seems our President has an inclination to disrupt the intricacy of global order. Recently the recognition of Jerusalem as Israel’s capital precipitated even more conflict in an already destabilized region.

The actions of Trump and his irregular diplomatic policies and positions has caused a general confusion in negotiations. NK has instead turned to Southern Korea for negotiations. The President cannot treat international disputes as petty squabbles in a sandbox.