An Indian and Pakistani coming together in supporting the cause for children's rights. 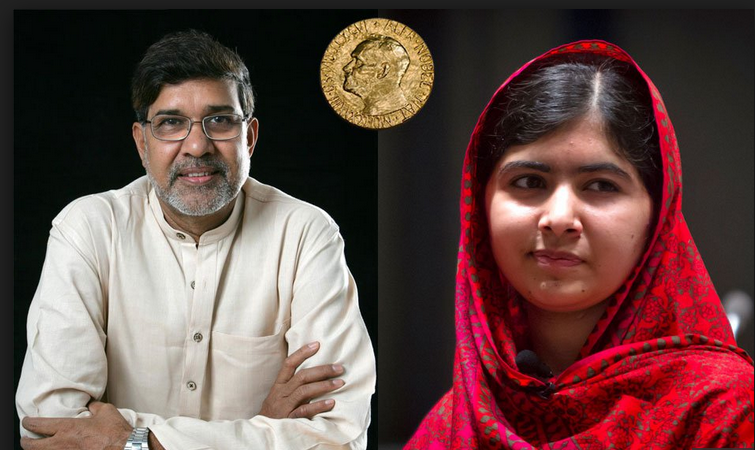 Malala Yousafzai and Kailash Styarthi have been awarded the Nobel Peace Prize for their accomplishments as activists for children's education.

On October 10, 2014, Malala Yousafzai, a Pakistani activist,  along with Kailash Satyarthi, became the winners of the 2014 Nobel Piece Prize. Wait, who is she again?

In 2012, the Taliban, an extremist Muslim group, shot Malala Yousafzai at point blank range. Yousafzai was immediately taken to the Queen Elizabeth Hospital in England from Rawalpindi, Pakistan to undergo numerous surgeries. While the assassin’s bullet did not perforate the brain, it did wedge in the skull, causing swelling. After many successful surgeries, Yousafzai began to make a full recovery. A miracle at its finest! Malala’s story  has sparked revolutionary demands for education which shifted the world’s perspective on the impact that young adults can have towards society. She has become the global symbol for girls’ education.

Since being the youngest winner of the Nobel Piece Prize, Malala, 17,  proves to the world that ” a single book and a single pen ” can cause a wave of change across the world. Against the dangerous Taliban exemplifies great courage Malala possesses and so proudly uses in the name of any who are oppressed.  Aleeha Kalam (11)  believes that “Malala will always be in inspiration to young women who value the importance of education, even in the most remote countries of the world.” Yousafzai is jubilant to be the second Pakistani to receive a Nobel Prize, after Abdus Salam, who was the first Pakistani to win the 1979 Nobel Piece Prize for Physics. After being awarded the Nobel Peace Prize, some were discontent that it was awarded to her. A Norwegian jurist who wrote a novel about the Nobel Piece Prize, Fredrik Heffermehl, commented on the winning of Malala’s Nobel Prize: “This is not for fine people who have done nice things and are glad to receive it. All of that is irrelevant. What Nobel wanted was a prize that promoted global disarmament.”(nytimes.com)

Yousafzai shared the prize with Kailash Satyarthi, an Indian man who has rescued trafficked children from slavery in India.

Kailash Satyarthi, a 60-year old, has been fighting against child slavery in the slums of India. He has saved 83,000 Indian children from virtual slavery. He has campaigned for 34 years to end child labor. He has transformed more than 350 Indian villages into places where children can receive an education rather than be sent out to work. (nbcnews.com) With such accomplishments, Satyarthi has been previously recognized and awarded by Europe and the United States, including the Robert F. Kennedy Human Rights Award and the State Department. Satyarthi is the fifth Nobel Prize winner for India. In addition, Kailash is the only second Indian winner after Mother Theresa in 1979. (What a coincidence!)

Yousafzai and Satyarthi will split the $1.1 million dollar prize.