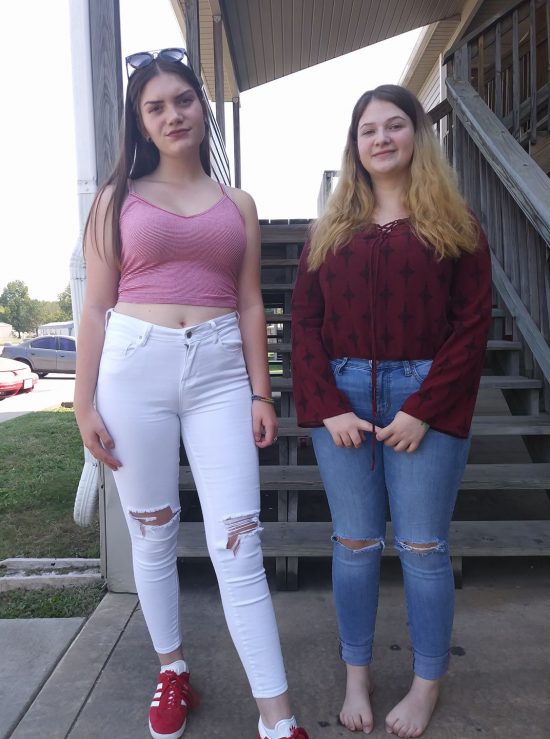 Katelyn Gilbreth (left) and Kelsey Anderson (right) both wore these outfits to school, but only Anderson got dress coded due to her larger bust size.

At the beginning of each school year, every student is handed a paper to sign. This paper states that the students agree to, among other things, the school dress code. Despite dress codes varying from school to school, are they equally fair? There are far more limitations listed for girls than there are for boys, yet boys still practically have no dress code.

In many instances, such as Kelsey Anderson’s at Joplin High School in Missouri, Girls have been dress coded for outfits that are well within their school rules. Yet, boys are allowed to wear shirts with provocative images and slang printed onto them–some of these shirts even going as far as showing nude or barely clothed women. Yet, a girl who attends the same school cannot wear a strapless shirt with her jeans. Madison Dekker (11) agrees that dress codes, including the one at Yorba Linda High School, are “completely unfair and only enforced with the girls at the school.” By allowing boys to wear these shirts, schools are teaching young girls that dress code standards are only applicable to girls, whereas their male counterparts are exempt and can dress how they please.

I believe the real question is not whether girls dress appropriately, but rather why society sexualizes a shoulder, or a leg, deeming them too distracting for males to concentrate when said body parts are visible. There have even been cases when girls have been sent home from school for the length of her shorts, yet a boy who had shorter shorts faced no ramifications. It is unfair that a female’s leg is considered distracting, yet on the contrary, a male’s leg has no effect.

The most degrading part of school dress codes is the fact that girls are taught at a young age that how they dress is more important than their education. They are repeatedly reminded not to dress too provocatively, for this might distract their male counterparts. Not only is a male’s distraction not at fault for a female’s clothing, but it also has no way to be controlled by a female, despite what they’re wearing. If boys truly are so easily distracted, then we should be teaching them how to control themselves, not forcing girls to cover up. The sexist double standard that is school dress codes just adds to rape culture and encourages boys to sexualize women and their bodies.

In society, a female’s choice of dress is often used as justification for rape. A prime example of this is Danna Karen defending Harvey Weinstein’s many outcoming rapes by blaming the women for their provocative choice of dress. Not only is this extremely unfair and degrading to women everywhere, but it is completely wrong. Weinstein is a successful film producer in Hollywood and the majority of his rape victims worked on his sets. Therefore, most of the time these woman that dressed “provocatively” were being told what to wear, not choosing. Even so, the girls that were choosing their own attire were still appropriate clothed for the workplace. The very fact that Karen, being the female fashion designer that she is, would so bluntly defend this rapist and place blame on the victims clearly demonstrates the true injustice of dress codes, whether formal or imposed by society.

As a country, as a community, as a group of kind-hearted human beings, we need to find a way to overcome the rape culture society has created and defeat sexist dress codes. Then we will be one step closer to true equality in schools, places of work, and everyday life.