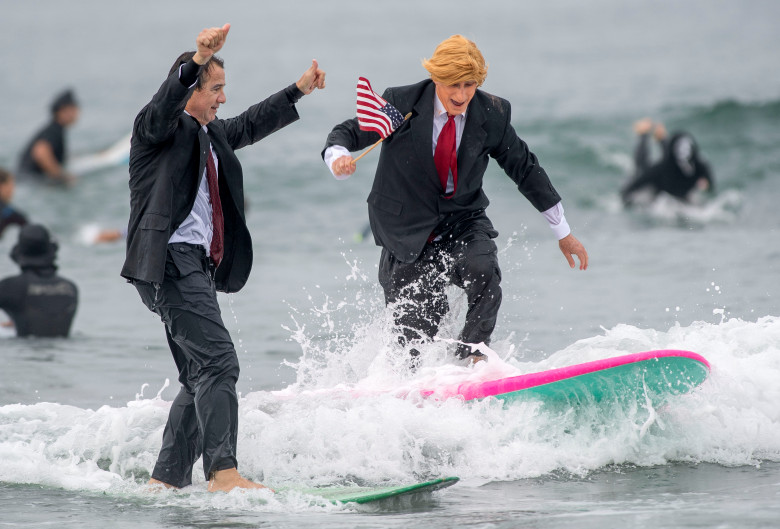 Local Surfer Gary Crane and friends get in the holiday spirit with a costume of Donald Trump waving an American Flag.

Many local surfers along the beautiful stretch of Newport Beach, are not only doing what they love, but adding more fun and smiles to everyone who watches. Dressing up in costumes during the months of October and November has become an overwhelming normality that has swept the beaches of Southern California. Adding just enough laughs to make viewers forget about the struggles of daily life, and to just enjoy the wave riding scenery.

An event that started twelve years ago, surfers began coming up with a vast amount of costumes to celebrate not only halloween, but the holiday season as a whole. According to the OC Register, the idea was originally sponsored by the Blackies classic Longboard association. Not only was the event sparked in order to simply add “waves and smiles to all who dress up,” but to add a different element to surfing no one has ever seen before.

With this year becoming the “year of the sharks” local participants including Bill Ryan, a local surf guru in the streets of Laguna Niguel, sparked much attention when he wore a intricate Kelly slater costume in the calm and subtle waters of Newport Beach. More instances such as a surfer tying an inflatable shark to his board, has attracted much attention due to the intricacy of this new trend. Brooks Perry (10), “loves the idea of surfing in costumes,” due to the “never before seen” intricacy of these local surfers. Not only getting locals into the trend, but putting the happiness of the people before themselves.

Over the years, the act of surfers taking to the seas in these intricate costumes has become just a one time a year thing. However, this year, local surfers and ocean enthusiasts decided to take it up a notch. According to the OC Register, over the past two weeks, there has been many surfers spotted in the seas of Newport wearing costumes such as Skeletons and face masks of Donald Trump. Such including professional surfer Patrick Gud. After sparking attention in his costume at Trestles Beach, Gud along with his friends at Vans, are provoking more and more people to get out there and evolve a new way of surfing no one has seen before. Deep cuts and aerials are still being made even through the layers of clothing that these costumes provide. Not only sparking attention within the eyes of Californians, but that of the whole Surfing world.