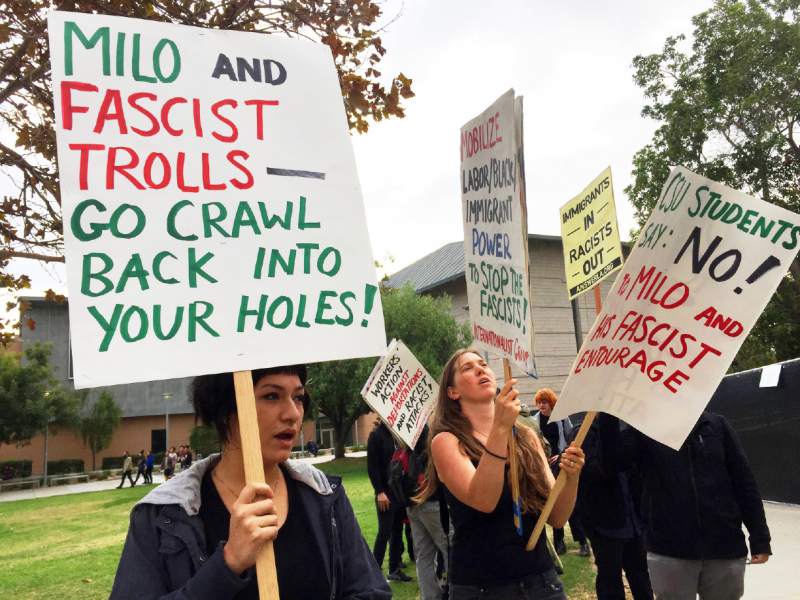 Students protesting outside of Milo Yiannopolous's speech on October 31, 2017.

Protesting of speakers with opposing views has become increasingly prevalent on college campuses. A pattern has emerged over the course of the last few years all across the nation from Daytona Beach, Florida to Berkeley, California. With this influx of protests, the question of ethics must be raised. Should students be protesting people with differing views than their own speaking at their campuses? Or does this oppress a person’s freedom of speech while also contributing to a world of ignorance?

Over the duration of this last year especially, protesting college speakers has become a common occurrence. Earlier this summer, Middlebury College located in Vermont held a violent protest against guest speaker, conservative Sociologist Charles Murray. Because he had written a book in 1994 linking lower socioeconomic status with race and intelligence, students were infuriated by his appearance to make a speech at their campus. As he was leaving, they shoved and yelled at him the halls. CNN Journalist Larry Atkins wrote in response to the event, “Even though I am a liberal and a university professor, I find this to be a continuation of a disturbing trend of silencing conservatives’ free speech rights on college campuses” (CNN). Many professors have also expressed their beliefs that it is “not free speech to stop speech” (USA Today). Regardless of the subject matter, it is considered civil disobedience if the expression of one’s rights oppresses another’s.

Other speakers, such as conservative commentator, Ann Coulter, backed out of speaking on a campus all together. Because of the backlash surrounding her speaking engagement in April 2017 at UC Berkeley, she decided to not attend at all. This thus prevented possible productive conversations among the students and speaker (USA Today). It is of necessity to be able to hear each other out, especially during of such great division.

The most recent occurrence of protest against a college speaker occurred at California State University, Fullerton. Conservative provocateur, Milo Yiannopoulos came to speak on October 31 at the California campus. His arrival was met with a soldout crowd, but also protestors and police officers. He was accused of projecting hate speech and being a fascist, and prior to his arrival a petition had been sent around trying to sway the administrations to blocking his attendance (OC Register).

Yet it can be illustrated by the attendance of over 800 people, that many were interested in hearing him speak, therefore canceling his event would have hindered many students the opportunity to understand his views. Therefore by certain students objecting to speakers visiting campuses, it also prevents other students from hearing ideas of like-minded people. CSUF Campus Republicans Club President states, “For too long, left-leaning groups have dominated campus culture and marginalized conservative thinkers through intimidation tactics and violent protests. The CSUF Republicans provides a place for all voices to be heard” (OC Register).

Generally speaking, ideas on protests against college speakers is controversial. Some feel that people are entitled the right to protest given that they are using their freedom of speech to prevent hate speech. Corinne Green [10] feels otherwise stating, “I feel speakers have the right to free speech as long as they are not doing harm or forcing students to believe or act a certain way.” Overall, protesting college speakers is a common and sometimes problematic issue that must be resolved.