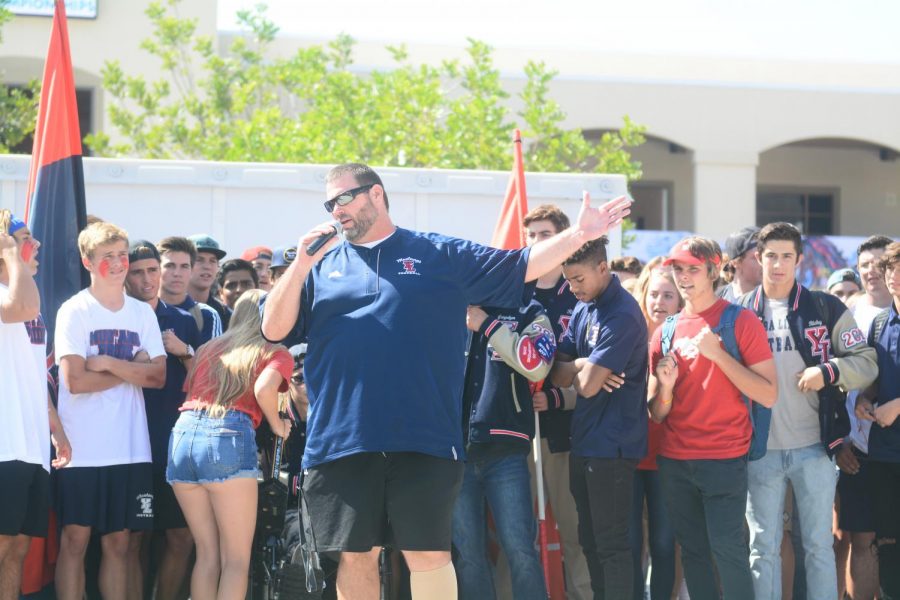 Fifteen minutes before fourth period was over, Yorba Linda High School was filled with energetic students pumped up for the big day. October 13 was the rivalry game day and everyone was nervous for the results, not only the football game, but also the annual canned food drive. With anticipation stirring up, the school erupts with Navy, Crimson, Silver pride and students walking through the hallways creating a peaceful frenzy.

As the clock strikes twelve, band, color guard, water polo, football, cheer, song, ASB, and many other students join in to create a parade of school colors walking through the halls. Students hyped for the game, paint their bodies in advance to show their school pride.

Walking through the school, band is playing music and color guard are swaying their flags back and forth. Students from football and water polo are screaming in excitement and banging on windows to get students in classrooms hyped up. Cheer girls are smiling while shaking their pom poms. Through all of this commotion, everyone finds time to chant some Yorba Linda High School cheers.

The mob of students going through the school, gaining more kids as they walk past classrooms. Going around the perimeter of the school upstairs and down, they end up in the quad. By this time, staff and students gather around in a mob to observe the quarterback and ASB talk about what is to be expected at the game.

Water polo players and Stable leaders come in the center of the circle to get the attention of the crowd. They hope to gain support from the student body in regards to showing up to the game. Then walks in our first string, injured quarterback talking about his football experience, then hands the mic to the starting quarterback. After all this, cheer and song do a dance to excite the crowd for the game.

While all this excitement was still in the air, everyone gathered in a circle to watch students dance and do flips in the quad. Many people went in to show their talent, and the crowd absolutely went ballistic.

The Roaming Rally really does capture the true innocence of Yorba Linda High School when compared to our rivals. While they focus on bashing us, we focus on enhancing our spirit. Emily Remer (11)  states that “students here have a pride in their school” and whether we win or lose, “we are a family.” She also goes on to say that “the Roaming Rally is just a way to get everyone ready for the game.”

After school, many students went to the water polo game to watch the Mustangs beat the Aztecs 7 to 3. Then we headed to the pep rally that got everyone ready for the big win in the canned food drive and football game. In football, we beat them 51 to 7. They got their one touchdown while our Junior Varsity team was in. The big win of the day was the annual canned food drive. We had a little more than 64,000 cans while they only had a little more than 30,000. It was a great week for Yorba Linda High School. We can’t wait for next year!