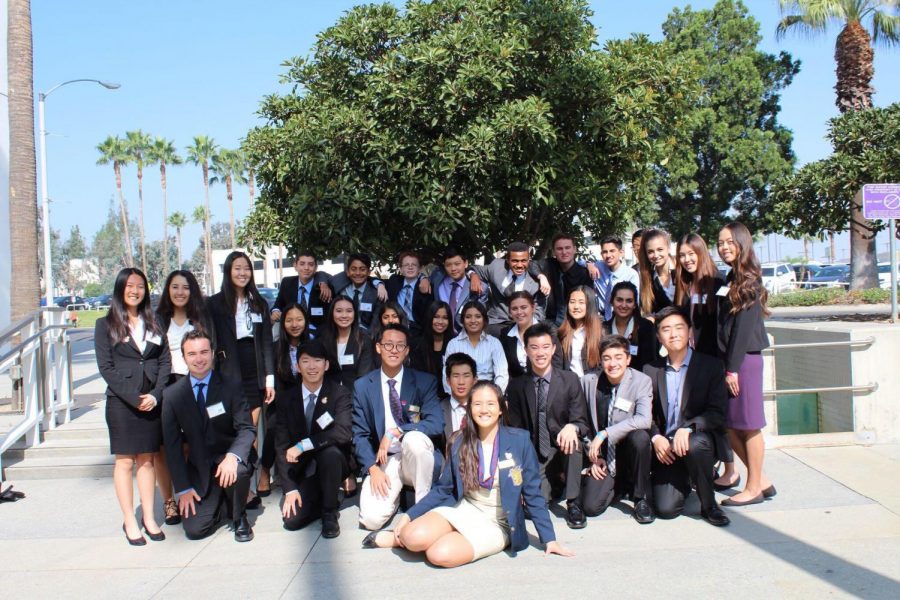 YLHS's FBLA just outside the Ontario Convention Center for LDI

This past weekend, a group of YLHS students attended the 2017 Leadership Development Institute (LDI) for Future Business Leaders of America (FBLA). FBLA is the biggest career oriented, student run organization in the world. Through conferences, competitive events, workshops, community service events, and a number of other opportunities, FBLA trains students for a future in business and teaches lifelong lessons. LDI is just the first of a handful of conferences throughout the year, and it is the best way for students to learn what FBLA is really about.

This year, LDI was held at the Ontario Convention Center in Ontario, California. Students from all over Southern California attended including those from YLHS. It was a two-day event, spanning from Saturday to Sunday and required students to stay overnight at a nearby hotel. Three sections, of which there are multiple across California, came together to run LDI. These sections were Southern, Gold Coast, and Inland. YLHS is in the Southern section, and has the honor of having two students as section board members this year.

Emily Remer, a junior at YLHS, is the leadership associate for the Southern section and also the vice president of community service of YLHS FBLA. Nick Ding, a senior at YLHS, is secretary of the Southern section as well as the president of YLHS FBLA. He commented on his experience at LDI, saying that it is
“the best opportunity to discover your passion for FBLA” and that he “personally fell in love with FBLA when [he] attended [his] first LDI three years ago”.
The first day was filled with a wide array of workshops that attendees could choose from, covering topics that all enriched student learning and contained valuable information. Nick Ding and Emily Remer each had their own workshops which attracted a number of students and proved to be a huge success. In between the workshops was the opening ceremony which consisted of an introduction of board members from each section and a keynote presentation by The Voice contestant and singer Davina Leone. Afterwards, the members enjoyed a dinner at Rainforest Cafe before attending a fundraiser held with March of Dimes, a charity that supports the health of mothers and their babies.

Day two started bright and early for all of the FBLA members as they got up early in the morning to take practice tests. FBLA offers over 60 competitive events, many of which include objective tests that each take one hour to complete. The practice tests were the perfect opportunity for attendees to practice their skills and decide which event they might consider competing in. After the practice tests was the closing ceremony which concluded 2017’s FBLA Southern Section LDI.

Overall, the YLHS students who attended FBLA’s LDI were able to create lasting memories, gain a wide array of information to learn about the business world, and also make new friends as they networked with like-minded students from a number of different schools. Nick Ding (12) summed up the experience by saying that
“the networking, competitive events, and service [have] been a huge part of [his] life” and that “we had a great group of kids from Yorba Linda go this year, and we hope to bring even more next year!”