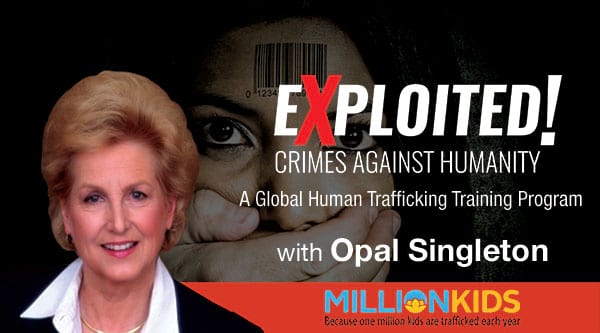 Human Sex Trafficking is the fastest growing crime in America and California is the number one state where this is found most often. Opal Singleton, the CEO and President of a teenage trafficking awareness group called MillionKids as well as Training and Outreach Coordinator for Riverside County Anti Human Trafficking Task Force (RCAHT Task Force), recognized this problem and made sure to do all that she can to help with the cases and their victims.

Just this Sunday, October 8, Opal spoke about her organization at Richfield Community Church, or RCC, with their own program, REACH, which stands for Richfield Education Action and Compassion for Human Trafficking. REACH was previously working to help support any victims of trafficking as well as bringing more awareness of how it occurs and how to prevent it. They first heard of Opal after Dennis Griggs, the lead pastor of the REACH ministry, heard her speak and offered her the opportunity to speak at RCC. She was more than happy to participate in the collaboration of their two organizations.

During the event, Opal primarily focused on how online gaming and social media has a play on trafficking. According to her lecture, gaming is a popular method of capture because of how easy it is to lie and make fake friends on the sites.The teens and kids playing online are easy targets because of their youth and inexperience online, and they are quick to trust complete strangers. These kids are tricked with fake affection and soon pulled into something that they can’t get out of, at least not by themselves.

She wrote a book titled Seduced which is about how traffickers and pedophiles groom, or seduce and catch, teens of both young girls and young boys online in detail. Her intentions in writing the book were to bring awareness the young teens who fail to see the harm in putting themselves online and how much of themselves are exposed. “It is real,” states Opal on the back of her book. “It is eye-opening. It could change your life and the life of your family.”

MillionKids was created by her pastor, but he handed it off to her so she is now in charge. The organization covers sex trafficking, labor trafficking, prostitution, extortion, child pornography, predators, pimps, gangs, manipulation, extortion, and missing children. The name was derived from the fact that one million kids are trafficked each year worldwide. She also trains thousands of government agencies, schools, and other corporations about how they can work to prevent human trafficking.

“I think that is awful. I don’t necessarily talk to people online, but I know people that do,” comments Delaney Pietsch (11). “It is definitely gonna make me more cautious in the future.”

Opal continues to help rehabilitate the victims back into their normal lives and spread awareness of how important it is to be careful online and who teens speak to on public forums. Every person who learns about trafficking can help save a life.