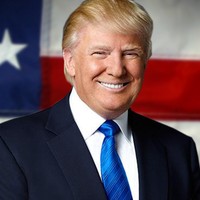 Donald Trump smiles in front of an American flag.

Since the beginning of our history, the United States of America has elected their president through a democratic process. President Trump is no different; he was elected by the people. Yet, many Americans are unhappy with Trump being in office. These people call to impeach Trump. Is this a valid request, or are they just being wishful thinkers? Well, considering the facts, this is most likely wishful thinking.

Trump is a Republican. Currently, Republicans hold the power in both the House of Representatives as well as both houses of Congress. With a Republican to Democrat ratio of 248:192 in the House of Representatives and 54:44 in Congress, it is extremely unlikely for a Republican to be impeached from office. This would require political unity from both parties. Despite this having happened in the past, it has only occurred twice, and with today’s political views being so vastly separated between Democrats and Republicans, it is unlikely it will happen anytime soon.

Although it most likely will not happen, that doesn’t stop ourselves from asking should it happen. The US Constitution states a president “shall be removed from office on impeachment for, and conviction of, treason, bribery, or other high crimes or misdemeanours.” Early in Trump’s term, Democrats in the upper government tried to impeach him due to his firing of FBI Director James Comey; this was unsuccessful since there wasn’t sufficient evidence that called for impeachment. Many government officials have also pointed to the various international business dealings which Trump’s company seems to be profiting off of, yet once again sufficient evidence for impeachment could not be provided.

Despite the many mistakes Trump is making in office, people are jumping the gun to fire him from his Presidency. A new job is never easy, and many Democrats have their feelings hurt due to the loss of their candidate. According to the laws which are in place regarding impeachment, paired up with the Republican support Trump holds in both the Senate and the House of Representatives, there is little to no reason, or chance, that Trump could realistically be impeached. He has made many bad choices, yet “he is [also] being judged way too harshly by the public,” says Jessica Ryan (11). If as a whole, we could open up our hearts and minds to a different perspective supporting Trump and his unique and extensive business knowledge, we could accomplish great things for the United States of America.